I look at grief as more of a frienemy than anything else. To be honest, it’s been this way since day one. That’s not to say my relationship with grief hasn’t changed over time, it has immensely. But no matter how much emotional torment grief has laid upon me, even in the early days, I’ve never truly wanted it to go away. Did I regret the necessity of its existence? Heck yes. But if my mother was going to be dead, then doggone it I was going to grieve her.

I know this sounds extremely counter-intuitive to many people because for so long our society has conceptualized grief as something to be resolved or ended. Grief is painful, right? Especially acute grief. Aren’t humans hardwired to try to avoid pain? Then why would anyone want to hold onto it?

It’s kind of hard to explain, but even when grief was extremely painful, I didn’t want to escape it. I guess at the time, as terrible as grief felt, it also seemed like my memories and connection to my mother existed within it. My grief became an ongoing vigil, allowing me to stay focused and devoted to my mother’s memory for as long as her death warranted.

After my mother died, I felt like my love for her was defined by my pain and suffering. My mother’s death was devastating, so it was only right that I should feel devastated for a devastatingly long time. For me, feeling okay seemed like getting over it or moving on, which I wasn’t ready to do.  Not only did feeling better feel inconceivable, but it felt wrong. 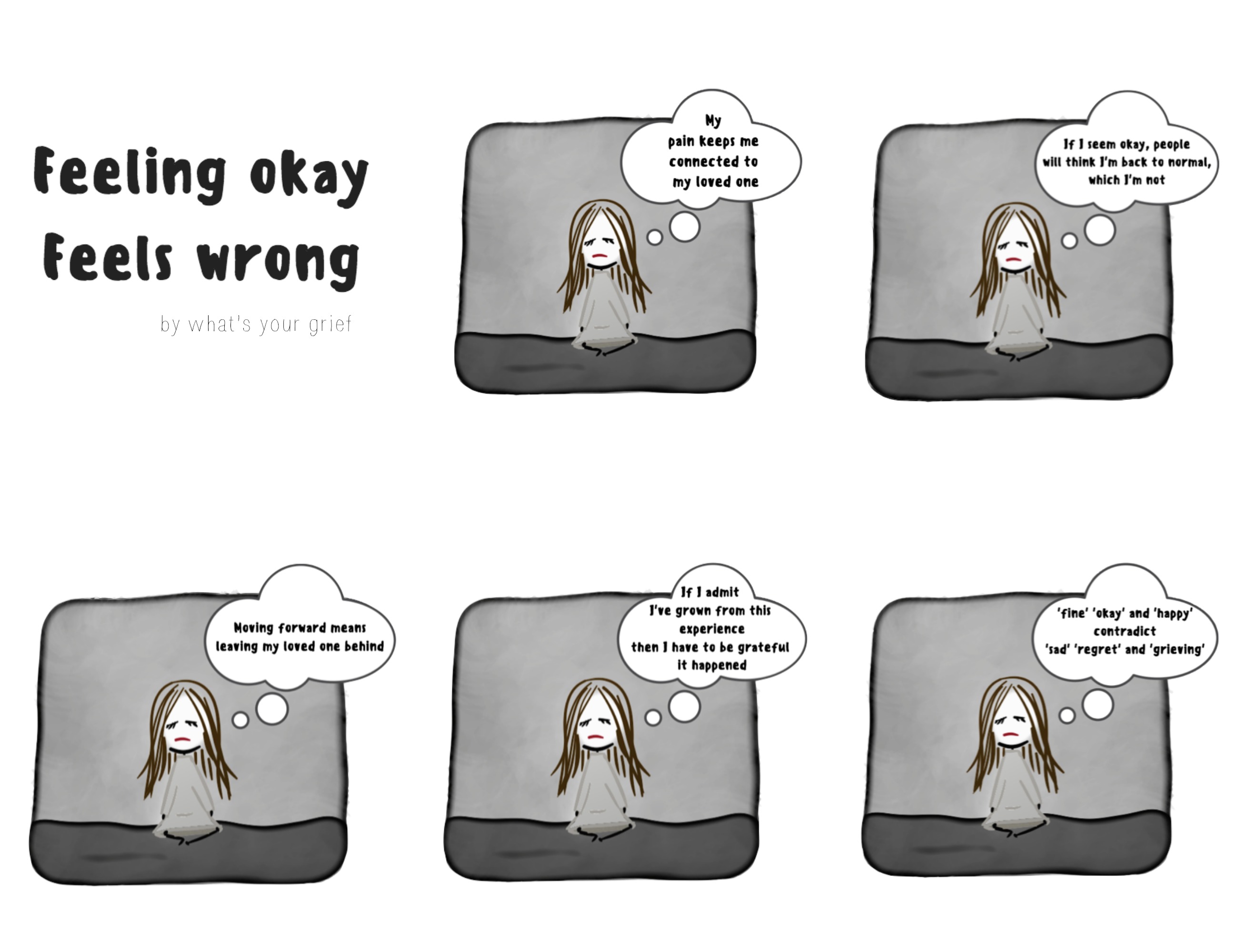 I, like many people, mistakenly believed that my grief and pain had to end before I could feel better. It took a lot of struggle and a pretty significant cognitive shift for me to realize that grief and healing are not mutually exclusive.

I didn’t know a lot of things, and if at the time you had told me all the things I didn’t know, I wouldn’t have believed you. These are realizations I had to come to myself. Just as my words here can’t make these realities any more true or attainable for you, I get that.

Recently I’ve seen a few people comment that they can’t acknowledge positive healing or find things to feel grateful for in their lives because, if they do, it means they are somehow okay with their loved one’s death. This thought process is normal and natural in grief, it’s also one that I hope our readers are able to eventually put into perspective as they come to their own realizations about grief and their continued bond with their loved one.

I understand why grieving people feel put off by words like ‘growth’ and ‘healing’, especially in the early days of grief.  When you feel terrible, these concepts are annoying, but even if you’re not open to these concepts now, I hope you’re open to being open to them someday (baby steps). I’m not asking you to plant flowers, I’m asking you to believe in the possibility of them. To believe that they could someday grow even in darkest shadows of your grief.

Obviously, never in a million years would you have chosen for your loved one to die, but this path was chosen for you. Any posttraumatic growth you experience at this point is merely a byproduct of you coping with the only choice you were given – to persevere.

This is a concept we’ve written about before.  No matter where you are in your grief, you may find the following articles helpful.

The Truth About Posttraumatic Growth

Grief and the Fear of Letting Go

The Reality of Growth and Grief: Where the hell is my rainbow?

Coping with the Conflicting Emotions of Grief