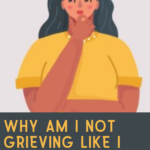 Never have I ever heard a bereaved person exclaim, “Grief is just as expected it to be!” Grief is full of surprises, and usually not the enjoyable kind. We talk a lot about how unexpectedly overwhelming the grief experience can be. You think it will be one thing and then it turns out to be many many more things.

On the other end of the spectrum, many people are surprised by a grief response that feels far less intense than anticipated. Though this is relatively common, it’s seldom recognized, so when people experience it, they often wonder, “What’s wrong with me?!? Why am I not grieving?” Is this ‘absent grief’?

The APA Dictionary of Psychology defines ‘absent grief’ as: “A form of complicated grief in which a person shows no, or only a few, signs of distress about the death of a loved one. This pattern of grief is thought to be an impaired response resulting from denial or avoidance of the emotional realities of the loss.” Many descriptions and definitions for absent grief place it under the heading of “complex” or “complicated.” So obviously, there are instances where absent grief indicates difficulties in coping that go beyond the norms.

However, we don’t want to pathologize the experience of (semi)absent grief on a whole, and, actually, we’re not going to talk about psychological disorders or complicated grief reactions today. If you want to read more about these topics, try these two articles:

Ultimately, there are many reasons why a person might feel they aren’t grieving as much as they expected. Only some are related to things like avoidance, denial, and complicated grief.  In this article, we’re going to discuss a few of the more common ones.

Why am I not grieving like I expected to?

Your Idea of Grief is Based on Assumptions vs. Reality:

A person’s idea of what grief looks and feels like begins to form early on. Even before experiencing personal loss, things like cultural attitudes, spiritual beliefs, family history, and family norms start to shape grief expectations. In our society, one of the most significant influences is what one sees depicted on television and in the movies. I’m sure we could come up with a handful of realistic and understated grief performances. However, much of what you see and, most importantly,  remember, are highly dramatized performances. All this helps us to create a picture of what we think grief “should” look like.

Another way assumptions are shaped is something called “affective forecasting“.  Affective forecasting is when we imagine potential future events and predict how we think we would feel and behave if these things were to happen. Affective forecasting is something we all do pretty regularly but, as luck would have it, we’re not very good at it. Though we are reasonably accurate in anticipating whether events will generate positive or negative emotion, we’re often way off in predicting the intensity and duration of our emotional reactions. All this to say, grief often feels far different than your expectations. However, just because it doesn’t feel how you thought it would be, doesn’t mean it’s wrong.

Anticipatory grief is grief that occurs before a loss. Anytime circumstances lead loved ones to think that death is a real possibility, they may start to grieve aspects of the loss. As one might expect, this is common in instances of a terminal illness. Some other examples include having a loved one who:

Anticipatory grief doesn’t mean that a person will grieve any less. It just may mean that they can process aspects of the loss more slowly and overtime. Anticipatory grief may also cause a person to experience thoughts and emotions that feel contradictory to grief, but which really are very common to the grief-experience. For example, the person may feel relief that suffering has ended. Or they may feel ready for the distraction and normalcy of work or school more quickly than expected.

The Loss Still Hasn’t Sunk In:

Perhaps after your loved one’s death, you braced yourself for a tsunami of emotion but found that it never came. It’s common to believe that grief will be something big, bold, and instantaneous. However, many times people find that it takes a while for their hearts and mind to catch up to what they initially know only intellectually. Here are a few reasons why:

Shock: At first, the reality of your loved one’s death may not feel real to you. On some semi-conscious level, you think maybe this is a dream I will wake up from. These thoughts and feelings are normal. So normal, that most major grief theorists have made room for it in their grief models. As we wrote in our article, The Role of the Acute Stress Response in Grief:

“Kubler-Ross spoke of denial; Worden discussed accepting the reality of the loss; Rando talked about acknowledging the loss, and Bowlby and Parks focused on coping with shock and numbness.”

Although experiences vary, it’s helpful for people to acknowledge that an acute stress response may be a part of their grief process. Or perhaps more appropriately, the thing that happens before their grief sets in.

Your Loved One’s Physical Absence Isn’t Real to You Yet: Many grieving people have shared with us that their loss didn’t feel real until they found themselves confronted with a particular person, place, or thing. For example, a gentleman who had been away at the time of his mother’s death told us, “I went home and expected to find her where I always did, in the kitchen. When I found the place empty, that’s when it really hit me that she was gone.”

You’re Focused on Secondary Losses and Stressors:  In the days and weeks following a loved one’s death, there’s often so much to do. Someone has to plan the services, make sure the children are taken care of, learn to do the jobs your loved one used to do, etc. It’s common for people to feel as though they can’t stop to grieve their loved one’s death until all their basic needs, plus the needs of friends and family, have been met.

You are experiencing avoidance

As stated in the definition of absent grief shared above, it’s often the result of chronic avoidance and denial. We described avoidance in the article, Understanding Avoidance in Grief:

“When we talk about avoidance in regards to grief, we are usually referring to experiential avoidance. Experiential avoidance is an attempt to block out, reduce or change unpleasant thoughts, emotions or bodily sensations.  These are internal experiences that are perceived to be painful or threatening and might include fears of losing control, being embarrassed, or physical harm and thoughts and feelings including shame, guilt, hopelessness, meaninglessness, separation, isolation, etc.”

Some avoidance during grief is normal, but problems arise when avoidance becomes a person’s go-to coping skill. Some examples of chronic avoidance that might contribute to an absent grief response include:

You may feel like you should have a more significant grief response because you’re related to the person who died or because you were close with them once, and when you don’t, you feel bad. If we’re being honest, though, sometimes blood relatives are connected only by title, and sometimes people who were once close fall out of touch, lose contact and drift apart.

If this describes your experience, don’t feel bad. Just know that your grief for this person may look and feel different than you expected, and that’s okay.  Also, know that in these instances, you may simply grieve different things. For example, you might mourn the loss of hope for reconciliation or the hope of getting to know the person better someday.

WYG has an upcoming post about connecting with your grief when you feel disconnected. Stay tuned by subscribing!

We wrote a book!

After writing online articles for What’s Your Grief
for over a decade, we finally wrote a tangible,
real-life book!

After writing online articles for What’s Your Grief for over a decade, we finally wrote a tangible, real-life book!

What’s Your Grief? Lists to Help you Through Any Loss is for people experiencing any type of loss. This book discusses some of the most common grief experiences and breaks down psychological concepts to help you understand your thoughts and emotions. It also shares useful coping tools, and helps the reader reflect on their unique relationship with grief and loss.

What’s Your Grief? Lists to Help you Through Any Loss goes on sale September 27, 2022, but you can preorder at the following retailers:

Your Grief Feels Enormous When Someone Dies, Here’s Why

Grief is Human so Let’s Talk About It

46 Comments on "Absent Grief: Why Am I Not Grieving Like I Expected To?"