Sometimes grief can cause such extreme distress that it becomes unclear to the person what they are really dealing with.  I don’t mean in the first few months because the first few months are almost always hell.  In fact, up until recently clinicians were advised not to diagnose things like major depression and anxiety in individuals within the first two months following a death.  Although this has changed somewhat, clinicians are still advised to use caution – not because the person might not very well have these things, but because early on it can be hard to tell where grief ends and a true disorder begins.

I’m a regular WebMD abuser.  I’ve been diagnosed with a great many things, despite the fact that I haven’t seen a doctor in 4 years. My tendency to seek out, use, and abuse the internet to medicalize myself is exactly why I hesitate to cover concepts that might lead to someone thinking their grief is abnormal, atypical, or pathological.  Still, I believe in the old adage that knowledge is power and you never know what idea or concept might lead to someone’s “a-ha!” moment.  I’m not going to tell you that grief is ever pathological, but there are obviously very real reasons why people sometimes get stuck and these circumstances are worth discussing.

The diathesis-stress model is a widely accepted psychological theory (remember, theories are just one way of looking at something) that attempts to explain why some people develop certain disorders such as post-traumatic stress disorder (PTSD), anxiety disorders, and major depression. This model is complex and nuanced and a full explanation is well beyond the scope of this article, but even a basic understanding helps us to conceptualize why someone might struggle after experiencing the death of a loved one in a way they’ve never struggled before.

Additionally, the diathesis-stress model helps to explain why some people develop disorders when others do not.  For example, it explains why 10 people could experience a traumatic situation where they are under the same stress, feel the same level of fear, and witness the same horrors; yet only two people go on to develop PTSD, 1 person develops depression and the other 7 people are, to varying degrees, able to cope with and integrate the experience.

Basically, the model asserts that some people have a genetic predisposition to develop disorders like depression, anxiety and PTSD.  Even though we all may  have some level of vulnerability to certain disorders, having this genetic trait makes you more vulnerable than others.  It does not guarantee that you will develop a disorder, but it puts you at risk especially when combined with other environmental influences.

By environmental influences, we mean factors such as early life experiences, social support, and exposure to other stressors.  Some environmental influences can have a protective effect, these are things such as having a strong social network of support, high self-esteem, and early life experiences that foster a sense of control, security, predictability, and the ability to cope with emotional pain.  Having a good amount of these experiences might safeguard someone with a genetic vulnerability from developing a psychological disorder.

On the other hand, some circumstances can have an opposite negative effect, such as having limited social support, low self-esteem, life experiences that create the sense that events are out of one’s control, unpredictable, and which foster avoidance.  Having one or more of these types of experiences might come together to create a second psychological vulnerability for developing psychological disorder (i.e. it makes things worse). 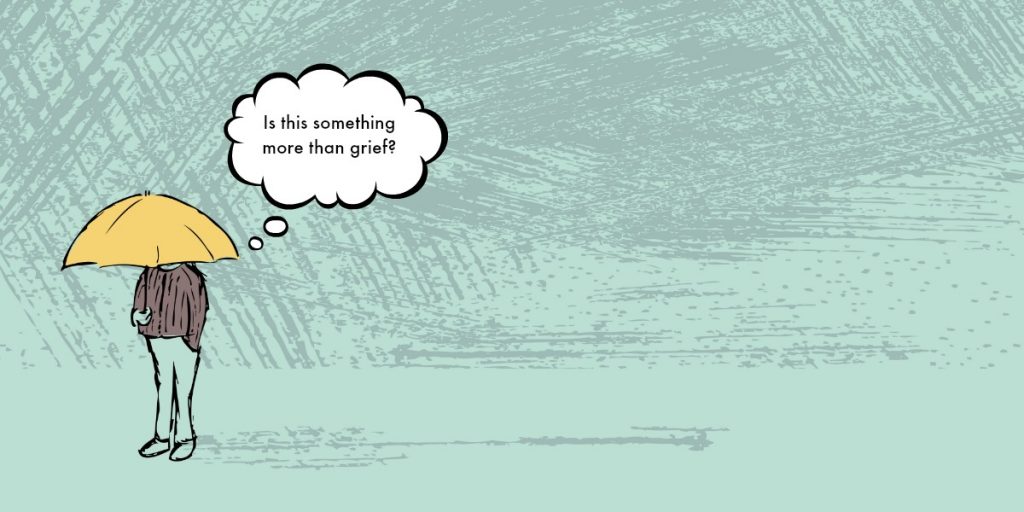 Despite having genetic and psychological vulnerabilities, a person still might not develop depression, anxiety or PTSD unless something happens to trigger it.  This is where the ‘stress’ in the diathesis-stress model comes in.  Stressors might include a whole slew of experiences, but most relevant to our conversation is – you guessed it – the death of a loved one or other significant loss.  This might explain why those who never had major depression, debilitating anxiety, or even substance use disorder before the death of a loved one might all of a sudden find themselves unable to get out of bed, obsessively worrying, panicking, or in the throws of addiction afterwards.

As I said earlier, sometimes it’s hard to see where grief ends and a true disorder begins. In fact, there is even a popular school of thought that says grief sometimes is a disorder in and of itself.   What the diathesis-stress model helps us to understand is that sometimes the events surrounding the death of a loved one could lead to both grief and psychological disorders such as PTSD, depression or anxiety disorders simultaneously.

It’s important to remember, grief can result in normal responses that feel completely foreign and distressing to the person who’s experiencing them.  What feels abnormal to you, may just be the result of the intense emotions and stress associated with the death of someone you love.  That being said if you’re experiencing emotions, behaviors, and thoughts which are distressing and limit your ability to engage in your daily function for a prolonged amount of time, it never hurts to talk to a mental health professional (again, preferably a licensed clinician with training in grief and bereavement).

You’ve gotten this far, I suppose you should probably just subscribe.

19 Comments on "Grief and Psychological Disorder: Understanding the Diathesis-Stress Model"