“Some people’s lives seem to flow in a narrative; mine had many stops and starts. That’s what trauma does. It interrupts the plot. You can’t process it because it doesn’t fit with what came before or what comes afterwards.” ― Jessica Stern

You never think the worst will happen to you, and then one day it does.  One day – in the time it takes for a doctor to utter the words ‘terminal cancer’, or for a driver to look down to find their phone, or for an artery to stop sending blood to the brain, or for a police officer to sharply knock on your front door – your life comes to an earth-shattering halt.

Before the worst happened you lived in a world that made sense; one that had structure and order and most of the time looked like a Norman Rockwell painting. Now you live in a world that feels meaningless and random and looks more like a Pablo Picasso. 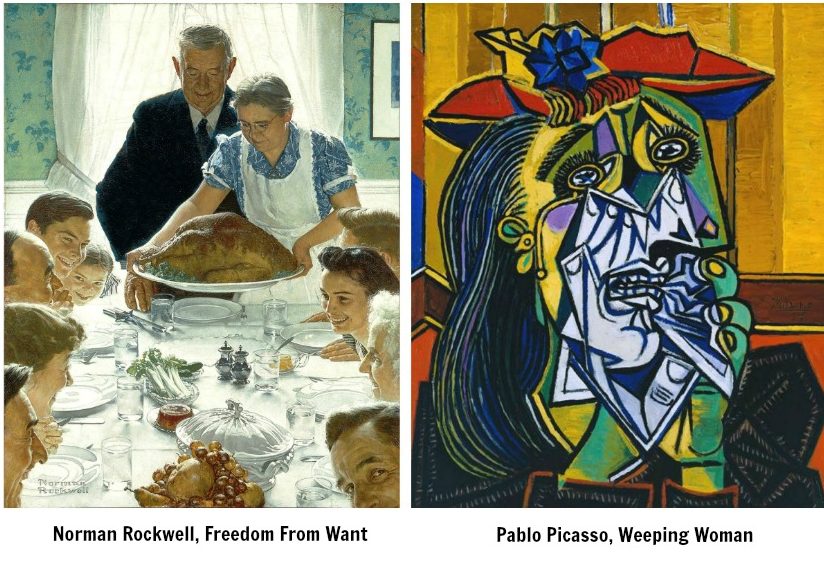 In 1992, psychologist Ronnie Janoff-Bulman described the theory of shattered assumptions in her book, Shattered assumptions: Towards a new psychology of trauma.  Although this theory is most often applied to trauma (which many of you have probably experienced), it helps to explain adjustment after any type of experience that challenges a person’s belief system or worldview.

In a very basic nutshell, the theory of shattered assumptions says that people operate according to a conceptual system based on a set of assumptions about the world, the self, and others. These personally held assumptions about how the world works, help you make sense of the world and your role within it.  They also help you to feel safe, capable, and in control of what happens to you and, in some ways, those around you. Psychologists refer to our basic assumptions as the “assumptive world” and believe that when extreme events challenge this assumptive world significant distress and disruption can occur.

For example: Before the worst happened, your assumptions may have lead you to assume that the world is logical; bad things happen for a reason; there is justice in the world; and if you ‘do everything right’ then things will turn out okay.  After you realized that there are things your worldview absolutely cannot reconcile or account for.

In the theory of shattered assumptions, Janoff-Bulman discusses three main assumptions that can be challenged by trauma.  You may have experienced upheaval around one or more of these basic assumptions, depending on your previously held beliefs, your perceptions around your loved one’s death, and your grief.

Assumptions about the benevolence of the world:

These assumptions refer to beliefs that (1) the world is generally a safe place where more good happens than bad and (2) the belief that most people have good intentions and can be trusted. Together these beliefs can lead a person to underestimate the likelihood that negative events will happen to them and create a false sense of invulnerability.  When a traumatic event shatters these assumptions, a person can feel anxious and helpless in a world that suddenly seems threatening and filled with dangerous and bad people.

How you feel about the benevolence of the world in the wake of your loved one’s death may depend on how you perceive the events that led up to and followed their death.  In general, once you experience the death of a loved one, it becomes increasingly difficult to ignore the reality that your loved ones can be taken from you at any moment.  Evidence of this can be seen in a study by Kristensen et al (2012) where 132 participants who had lost a close relative due to cancer were surveyed one-month post bereavement.  In this study, a large portion of the respondents showed a tendency to believe they would get cancer themselves.

Assumptions about the meaningfulness of the world:

When someone assumes that “everything happens for a reason” they might correspondingly believe that they have more control over events than they truly do. Also, if a person assumes they live in a “just world” they may believe they can protect themselves from negative experiences by behaving in a way that is “right” or “good”.  Some examples of this include…

If I eat right and exercise I won’t get cancer

Your loved one’s death may contradict many of your beliefs about the meaningfulness of the world.  Perhaps the death feels unfair, perhaps it violates your sense of control, or perhaps it proves that bad things can happen to good people.

The search for meaning…

The feeling that your loved one’s death was senseless or meaningless may ultimately lead you to ask the question – “Why?!?”

“Why did they have to die? Why did this happen to me? Who is at fault? What can I do to prevent this from happening again?”

Additionally, you may wind up being hurt by other people’s assumptions about the meaningfulness of the world.  Remember, some people want to believe that bad things only happen to people who deserve it.  So if someone has ever made an insensitive comment about why your loved one deserved what happened or how they brought the death upon themselves, this may be why.

Assumptions about the self as worthy:

Assumptions about the self as worthy refer to one’s perceptions that they are good, fortunate and lucky, and deserving of only good things.  These self-perceptions can lead a person to believe that they are worthy, decent, and capable people. The experience of trauma and victimization can cause a person to question their sense-of-self and to feel helpless, out of control, and, in an effort to make sense of the world, deserving of the trauma or loss.

Obviously individual feelings self-worth vary, but in someone who has not already experienced victimization or trauma, it makes sense that one might be lulled into the false sense that the world wants what’s best for them. Further, if someone has never been tested by hardship, it’s easy for them to assume they would be able to resiliently cope with obstacles and maintain their sense-of-self throughout.

In truth, hardships like trauma and grief can rock your sense-of-self in a way you would never have imagined.  I’ve heard many people say that grief made them feel like they were going utterly crazy. No one prepares you to deal with your spiraling sense-of-self in the face of grief and, for many, it can take a long time to get to know yourself in the wake of such trauma and loss.

Okay, that’s enough for today. If you want help coping with grief head over to our coping section or read this post on post-traumatic growth.