It has been a while since we have had a guest post around here, but don’t you worry – today we have the wonderful, talented Julia Massey, of Julia Massey and the Five Finger Discount, here to share her experience with the loss of her dad and its impact on her life and music.

I knew Julia when we were kids. Our father’s were friends, our families were neighbors, and her dad died just a couple of years before mine.  Though our lives have gone in different directions and we have not seen each other in well over 10 years, through the wonders of the internet I discovered her incredible band.  The band’s latest album, Five Letters From Far Away, is described on their website as,  “a brave story referring to the letters Julia’s dad wrote for her while she was growing up, one each year on her birthday.  The intention was to give them to her on her 18th birthday.  But then he passed away when she was 15.  Her mother gave her the letters and they have been a source of love and encouragement for her throughout her life, reflected in her writing and performing”.  When I read that I knew I had to reach out to Julia to see if she would be willing to share a little bit of her grief and music experience with us.  She kindly agreed to answer some of our questions.  So enjoy, and don’t forget to check out the band’s incredible album!

Tell us a little about yourself and how you got into music.  When I was in the first grade, I went to church with my family one typical Sunday morning and heard the song “Go Tell it on the Mountain.”  Upon returning home, I went to my Casio keyboard that I had received for Christmas and figured it out on piano.  That was when my Mom and Dad decided that I should have piano lessons. How I decided to make music my career and passion, however, was a different moment.  I had wrapped up my time with Teach for America in Brooklyn and I realized that I didn’t want to teach, at least for the time being.  I remember calling up my sister in Central Park and saying, “I have no idea what I want to do with my life.”  She suggested that I write down a list of all of the things I love to do without thinking about it and carry it in my wallet for a week.  She said that it might clear things up.  Making music was at the top of the list, and I had just recorded my second album that year, but it was that action of writing the list and setting an intention was the tipping point.

On your band’s website you talk about the letters from your dad and their influence on your most recent album.  Did you set out to write an album inspired by your father’s letters or did you just find this was a reoccurring theme in your writing over time?  You know how everything that happens in your life becomes clearer as time moves along?  Hindsight being 20/20, and whatnot.  That’s how my father’s death has been for me.  In the wake of everything that happened, and continues to happen, I can point to that moment as one of the major milestones in my development as a person.  When I lost someone that close to me at an early age, it forced me to question everything.  It made me very interested in philosophy, death, and spirituality which can’t help but weasel it’s way into my creative life. In other words, most of my music has been inspired by that experience, but the album title and the reference to the letters came later.  Almost as an homage to the tragedy, but also the gift that it was.  I’m glad I chose to acknowledge the letters he wrote with this album, though, because this one feels like the beginning of not only feeling more healed by the loss, but feeling ready to share with others what I cherish about it. 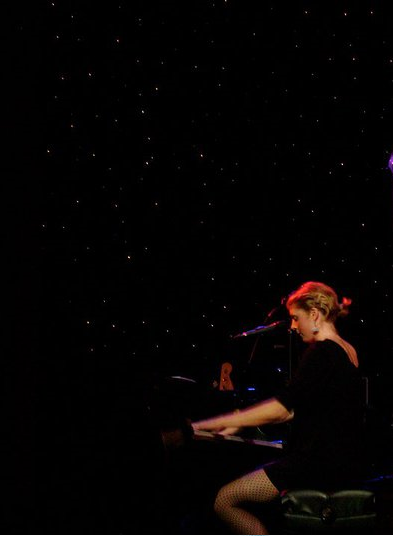 Can you tell us a little bit about your dad? He was larger than life.  Literally, for a kid.  At 6′ 4″ he loomed over almost every child around him, which came as a great convenience to him as a teacher and later, as an administrator.  He was a very self-aware individual, though, and in that very large person there was a very large and sensitive heart.  I am one of those lucky people who has seen her father cry at both happy and sad situations.  I learned early on from him that being a “tough guy” is ridiculous and that the relationships you have with people are deepened and enriched by wearing your heart on your sleeve.  That said, when he used his “principal voice” it was terrifying, but he made a point to always debrief with my sister and me when we got in trouble.  My mom and dad both did a great job of making us feel like we’d get to tell our side of the story. He was also incredibly silly.  Sometimes, at dinner, he would leave to go use the bathroom and return with toothpaste all over his face and act like nothing had happened.  We’d all try hard not react at first, but inevitably we’d lose it and laugh until we cried.

What other types of things have you found influence your music? It’s usually the stories that I hear from people in my life.  Someone will tell me something really heartbreaking or really inspiring and all of a sudden I can’t get it out of my head.  I have a lot of really brave people in my life who have gone through some crazy shit, and yet they are these beautiful souls who are learning to see who they truly are.  Other times I will read a newspaper article that demonizes someone and then write a song that tries to paint a picture of where the “bad guy/gal” was coming from to make him/her appear human because, after all, that’s what we are.

What’s your favorite line from any of your father’s letters? It’s a recurring one.  He pretty much put it at the end of every single one.  “On the day you were born I thought I had hit the maximum on how much you could love a person, but my love for you grows everyday.”

What’s one thing your father wrote to you that you would pass along to your (hypothetical) children one day? When I got to my pre-teen years, he wrote a lot about knowing that someday we might not get along everyday, but that he would try his best to not make me mad, and wanted to make sure that I didn’t forget that he would always love me more and more. I sometimes wonder about what it will be like to raise a teenager someday and I hope that I can communicate that to them when we butt heads.

What types of emotions do you find coming up the most in your music where your father is concerned? That has changed a lot over time.  At first, it was very sad.  He’s not everywhere, but sometimes it will be a single line that references him and when I got to those particular moments, if I was by myself, I would cry.  Now I get to those same moments and sometimes I still cry, but it’s out of gratitude.  More and more that’s the emotion.  Gratitude for his life, and how he is still here in me and all of the people who remember him.

What is your favorite song on this album?   It changes all the time, but I honestly haven’t listened to it straight through in a long time.  If I have to choose today I’ll say “Outro.”

We are big proponents of creativity as a means for coping with grief. Do you think your work as a musician has impacted your own grief and healing process? I would say it is the singular impact, but I have had fantastic counseling experiences as well that have been wonderful accompaniments (pun alert!) to the music as well.  Together they have been instrumental (look at me with more puns!) in the ongoing process of grief and healing.  I highly recommend any form of creativity to anyone and everyone who will experience loss.  And we all do, eventually.

The topic of death and grief can be touchy.  How have other people responded to the album and its inspiration? We’ve had an outpouring of positive responses to the album.  Some people stick to the music when they tell us how they’ve enjoyed it, but others bring up the inspiration, too.  We just received a message from a fan in Canada whose response to it ended up making me cry because he had resonated with a lot of the lyrics, admitting that he also cried in front of his daughter while listening.  Another dear friend of ours recently lost his father as well and he was very communicative in how it affected him.  It was a lucky gift to receive those kinds of responses.

Any advice you would share with someone who has suffered the recent loss of a parent, or someone else close to them? Something that really has helped me during times of total an utter sadness, just pure, pure sadness is reminding myself of something I heard Pema Chodron say once.  I can’t remember it verbatim but it’s part of her sect of Buddhism’s approach to healing, which is to say to yourself, “I am not the only person going through this.” I think that part of that deep grief and sadness is this sense that “I am the only person who knows how horrible and sad this is” but in reality, many other people are feeling it too, and probably at the same time.  It’s not easy to acknowledge that when it’s happening, but it was a helpful mantra for me. The other piece of advice that I can offer is, don’t let anyone else tell you how to grieve.  The way that you are processing it is as unique as you are.  Folks on the outside sometimes share their (unwanted) opinions about how it works, and what it feels like and what you should do, but that can be pretty toxic.  It’s your path, not theirs.

Visit Julia’s website here and check out the album:

Poems About Grief and Grieving

Should I Start a Grief Blog, Instagram, or Podcast? 7 Considerations

I Miss the Sound of Your Voice: Grieving Sensory Memory

Using Art to Cope with Grief