According to Centers for Disease Control and Prevention in 2013 there were 41,149 suicides in the United States.  This rate is equal to 113 suicides each day or one every 13 minutes.  Surveys have shown that 40% of adults know at least one person who has died by suicide and upwards of 20% of adults report their lives have been significantly impacted by suicide.

I have a lot I want to cover, so I won’t waste time on introductions.  I do realize, though, that some of you won’t read this post all the way through.  For those of you who know yourselves well enough to know you won’t finish, I want to let you know that I will link to additional resources at the end of this post.  Also, I want to invite anyone who has been touched by suicide to share your experiences in the comments below.  Although we can offer general thoughts on this subject, it is your insight that adds truth and nuance to this discussion and helps those facing similar circumstances feel less alone.

Although commonalities exist amongst people who have experienced a certain type of loss, individual grief is unique to the person experiencing it and their relationship with the person who died.  Although we can talk in averages and generalities, no article, grief theory, or set of symptoms will ever perfectly sum up your grief experience. Further, although you might be able to relate to aspects of another person’s grief (and vice versa), no one can completely understand how anyone else feels. With this in mind, we recommend you learn what you can from your commonalities with other grievers, but take differences with a grain of salt.

How we talk about suicide…

Although we may have a long way to go in understanding suicide and effective suicide prevention, thankfully progress has brought us far beyond the dark days when suicide was looked upon as a crime or religious offense.  Progress, though, is multifaceted and while our understanding of suicide has grown more compassionate, our language has not.

For this reason organizations like the World Health Organization, National Institute for Mental Health, American Association for Suicidology, American Foundation for Suicide Prevention and countless others have been working to shift suicide-related terminology.  Although there are many fine points to this conversation, I simply want to impress the following upon you…

When referring an individual’s death from suicide…

Do say… “She killed herself” or “She died by suicide”

I know most of you are used to saying “committed suicide” and you certainly aren’t alone.  Many people in our society have yet to get this memo, but now you have.  Please, the time has come for us to choose language around suicide that does not condemn or stigmatize the person who has died or those who love them.

Suicide as a traumatic loss…

When a loved one kills themselves, the death is often experienced as traumatic.  We typically use Wortman & Latack (2015) definition of traumatic loss…

This definition touches on many experiences common to suicide death including the death being sudden, untimely, violent, regarded as preventable, etc. However there are other traumatic loss risk factors associated with suicide such as feelings of blame, witnessing the death, and finding the body.  Deaths that are also potentially traumatic events can result in the compounding and intertwining of trauma and grief responses. These may manifest as the following (these are just a few so if you’d like more information on grieving a traumatic loss, head here):

It’s important to note, it is not the nature of a death that makes it traumatic, rather how the event is interpreted and processed by the individual. This means that, regardless of the circumstances around the death, it is not a given that it will be experienced as traumatic. One cannot underestimate the impact of personal factors like emotional regulation, cognitive responses, secondary stressors, coping style, prior history of trauma, and access to support and resources in determining how a person responds to an event. 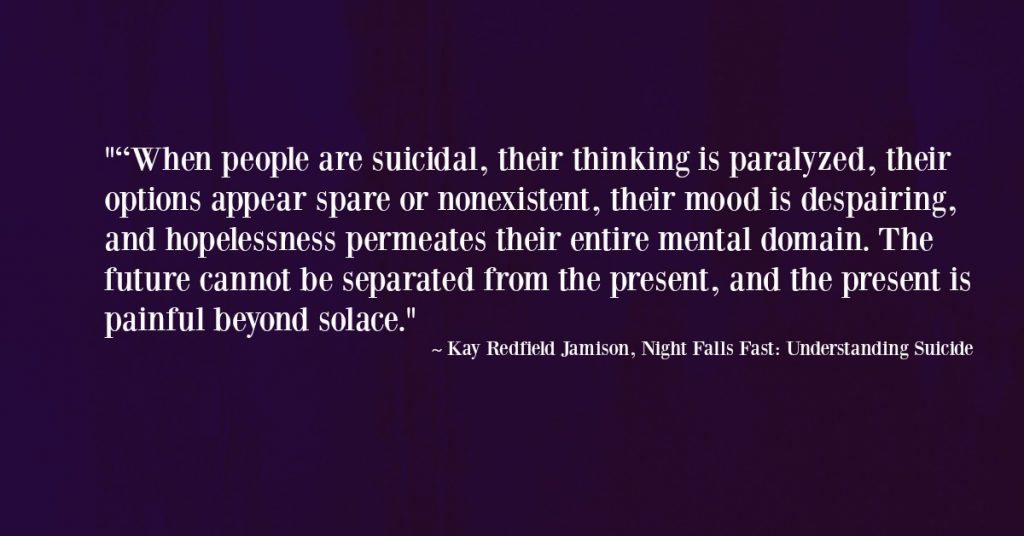 When grieving a suicide death one may experience…

The search for answers:

In the wake of death, people often seek to construct a meaningful narrative that helps them to find peace and understanding in what happened.  So it’s common to ask questions like “what if?”, “why?”, and “what’s the point?” Until the question of “why” can be answered, grieving family and friends may continue to search and ruminate.

After a suicide death, as with any other type of death, the bereaved may seek to make sense of what happened.  However in this instance they may find that many of their questions are either unanswerable or they lead to distressing conclusions (whether these conclusions are true or not). It is not uncommon for themes of personal blame to arise as the person questions their role in their loved one’s suicide and what they could have done to prevent their death.  Unfortunately, the bereaved may vastly overestimate their own role and the role of others (i.e. what family and friends did or didn’t do), as opposed to blaming things like mental illness which is quite often present.

Whether rational or not, grieving family and friends may struggle with distressing thoughts like…

The impact of expectedness…

Although suicide is often sudden, it is not always unexpected and so not all who experience the death of a loved one struggle to answer the question of “why?”.  In many instances there has been discussion of suicidal thoughts or past suicide attempts.  Maple et al (2007) found in interviews with suicidally bereaved parents that “preparedness” was linked with an ability to anticipate and explain their child’s death.  They note,

“Once they had acknowledged the inevitability of suicide they were able to weave this possibility, unwelcome as it was, into their life story to develop a coherent explanation.”

Regardless of the circumstances surrounding the death, things like complicated family dynamics, shifting roles, and different coping styles can test and challenge a family. After a suicide death additional conflict may emerge because…

Feelings of rejection and abandonment:

Evidence has shown that suicidally bereaved individuals experience higher levels of rejection compared with other bereaved groups. In grief, feelings of guilt, blame, regret, and rejection can be logical, but they can also defy all logic and reason. So even when it’s evident that the suicide was not an act of intentional abandonment, it still may feel that way to the people who grieve the death.

Approximately 90% of those who die by suicide have one or more mental disorders.  When the deceased is connected to the bereaved through genetics, especially in the instance of a child grieving a parent’s suicide death, the living family member(s) may worry that they too will develop mental illness and some day make the choice to kill themselves. Indeed, some research has indicated that a family history of suicide increases suicide risk.

If you know a child, or adult for that matter, struggling with these concerns don’t immediately disregard their worries.  If you are someone grappling with this concern, know that it is normal and if you’re really worried then it never hurts to seek out a little support and psycho-education from a therapist or counselor.

After a death mourners often feel as though they are going crazy, and, as noted, those who have experienced a traumatic loss often experience intensified and prolonged grief/trauma reactions.  If a person interprets their symptoms as dangerous, threatening, or indicative of a larger mental or physical problem, they are more likely to fear and inhibit their reactions (i.e. engage in avoidance).

Concerns about one’s own reactions following a death add to existing emotion by causing additional anxiety, depression, anger or shame.  Those who are fearful of their reactions may engage in maladaptive and persistent avoidance of triggers or reminders, which, in some cases, can contribute to the development of psychological disorder and prevent the mourner from finding meaningful ways to continue their bond with their loved one.

It is common for a person to feel relieved after a loved one dies, when the loved one had been living in pain and suffering. For those who die from illness, the relief comes from knowing they are no longer in physical pain.  And when a person dies from something like suicide or overdose, the relief may come from a place of knowing that their loved one is no longer struggling with emotional (and sometimes physical) pain.

Another reason someone might feel relief is if the loved one’s suicidal behavior (or other types of behavior) had put a strain on their family or other types of relationships. This doesn’t mean that the person grieving the loss wouldn’t trade their relief to have their loved one back for just one moment, or that they don’t also feel intense pain and sadness. It just means that relief is one feeling in their big, messy, hurricane of grief.

Feelings of isolation, stigma and/or shame:

Sadly, there is a stigma attached to mental illness and suicide.  Others can’t imagine the mental and emotional pain that would cause a person to kill themselves and so they might make assumptions or judge the deceased’s actions, calling them weak or selfish or who knows what else.

This being the case, it’s no wonder that many people choose not to open up about their loved one’s death.  Stigmatized losses may also be referred to as disenfranchised losses, which you can read more about here.  The following are just a few potential causes for isolation, stigma, and shame following a suicide death:

If you are grieving a loved one’s death from suicide you may find these resources helpful:

Alliance of Hope for Suicide Survivors

SAVE: Suicide awareness voices of education

To Write Love on Her Arms

In memory of Robin Williams: How to talk with kids about suicide

Review of the Dougy Center’s After a suicide death: An Activity Book for Grieving Kids

Review of Hospice of the Chesapeake’s Supporting Children After a Suicide Loss: a guide for parents and caregivers

7 Types of Grief You Should Know Right Now

What the Newly Bereaved Should Know

If She’ll Always Be With Me, Why Don’t I Feel Her?

In a World Filled With Loss, Who Gets to Grieve?

665 Comments on "Grieving a Suicide Death"