The recipe for a good vacation for me is a big pile of books.  Leaving for 10 days of vacation I packed 7 books, which my husband suggested was a bit excessive.  To his credit, I likely won’t make it through all of them, but it would be a vacation catastrophe if I ran out of books in a place with no bookstores or internet access.  Better safe than sorry. I spent a blissful hour walking around

Barnes and Noble selecting books from my endlessly long “books I want to read” list.  As noted, I ended up with 7 and among the final cut was Looking for Alaska

Quick tangent: if you are silently judging me for reading Young Adult novels, just stop.  Seriously.  I am on vacation.  Not to mention, YA literature has come a looong way in the last 20 years.  If you are depriving yourself of YA reads, you are missing some great books.  And if you are supporting a teenager dealing with grief,  I strongly recommend you dive into YA books.  Books can be a support and comfort in grief and, if you both read the book, they can foster some great discussion.

If you’re not even open to reading a post about a YA book  then I’ll give you the long and short: Looking for Alaska is a pretty good book, and it is a great book for grieving teens.  It does drop the f-bomb.  It does talk about sex.  Teenagers do get drunk and smoke pot.  But if you have convinced yourself that your teen hasn’t heard the f-bomb and doesn’t know about sex and drugs, there are deeper problems at hand. Feel free to email us for a reality check.

If you are ready for a more in-depth discussion of why this book is a teen-grief-recommend, welcome to today’s post: a look at grief in Looking for Alaska.  Let’s start here:  SPOILER ALERT!! Spoilers abound in this post, so quit now if you want to read the book with a clean slate.

The Summary
Looking for Alaska is the story of Miles Halter, a 6 foot tall, chicken-legged junior in high school with the ironic nickname ‘Pudge’.  With no friends at his public high school, Miles has asked his parents to send him to boarding school, in search of the ‘Great Perhaps’.  Miles meets a small crew of friends, including Alaska Young, “the hottest girl in all of human history”.  Alaska is a beautiful, charming, brilliant, train-wreck, who we find out early is plagued by a past that we (and her friends) don’t understand.  Pudge falls for her almost immediately, while being confused by her drama, moodiness and self-destructive behavior.   Known for her pranks, we get sucked into the life of this small, misfit crew of friends -their romances, drinking, smoking, and high-school pranks, while finally learning more and more of Alaska’s past.  We learn that her mother died when she was 8.  We learn that she was there and, paralyzed with fear, didn’t call 911.  Now both she and her father blame Alaska for her mother’s death.

Halfway through the book, Alaska has a lot to drink one night with Miles and Chip, becomes hysterical and drives off campus.  The friends wake in the morning to find that Alaska was in a terrible accident, killed instantly after driving directly into a police car that was at the scene of a jack-knifed tractor trailer.  In the second half of the book, Miles, Chip, and their other friends are left to make sense of the death, their guilt, and their grief.  Using the framework of their Religious Studies course to explore some of the more existential questions that weave through their grief, Green takes us through the months from Alaska’s death, in January, through the end of the school year.

The Format
Each short chapter of this book is titled with the number of days before or after Alaska’s death, though of course we don’t know that when we start.  The book starts “one hundred thirty-six days before the event” and ends “one hundred thirty-six days after the event”.   For anyone who has gone through a devastating loss of someone they love, especially an unexpected loss, you know that 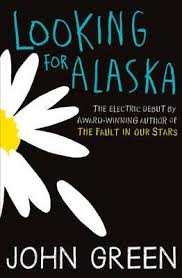 The Guilt
Guilt in grief is something that makes people incredibly uncomfortable.  We have tackled this topic in the past, because people looooove to tell us not to feel guilty (which just makes us want to punch them in the face).  This book tackles the topic of guilt head on, starting with Alaska’s guilt around her mother’s death.  When her friends learn what happened their inclination is to say exactly what you might imagine someone would say: it’s not your fault, you were only 8, etc.  When her friends finally learn what caused Alaska’s hysterics and her decision to drive the night she died, they realize it was because of an overwhelming guilt that she had forgotten the anniversary of her mother’s death.  When they realize this they try to piece the night together, recognizing the moment she remembered and what must have followed: “ . . . she gets into the car with the flowers.  But she’s already missed the anniversary. And she’s furious and she hates herself, and she decides, ‘That’s it, I’m doing it” . . .”

When Alaska herself dies, her friends are left with the guilt that they let her drive.  Interestingly, they are also left with the knowledge that it was Alaska’s guilt about her mother’s death that contributed to her impulsive, self-destructive behavior and ultimately her own death.  Her friends are left with their guilt, but also the knowledge that if they cannot make sense of their guilt that they may end up with the same complicated grief Alaska felt, 8 years after her mother’s death.

Looking for Answers
In the weeks following Alaska’s death, Miles and Chip are on an obsessive search for answers.  When there is no order to things, it is our nature as humans to try to put order to things.  We want to find a cause, a reason, something or someone to blame.  The friends explore every path to find answers, thinking the answers will bring them ‘closure’.  You feel for them, knowing their desperation, and yet I am sure many grievers will agree, you want to scream at them that the answers will never bring them the ‘closure’ they are hoping for.

Continuing Bonds
As the friends try to make sense of their grief and find their way, we see the ways they continue their relationships with Alaska.  In the spirit of the ‘continuing bonds’ theory, that we just talked about a few weeks ago, we see the way the group continues their relationship with Alaska – talking to her, finishing pranks that were her idea, using her words and questions as inspiration in their lives.  We see them find ways to share memories of her and talk about their own grief.

Religious Uncertainty
Throughout the book, Miles, Chip, and Alaska are in a Religious Studies course and we know that Miles does not have a strong faith in religion or the afterlife.  Asked in the class to pick the most important question about life and answer it from the perspective of Christianity, Islam, and Buddhism, Miles picks the question of the afterlife.  Alaska picks the question of suffering, Chip picks the question of why bad things happen to good people.  After Alaska’s death, Miles is left grieving without a belief that Alaska is in heaven or in another place.  He fixates on the idea that she is totally gone, that her body is rotting in the ground being eaten by bugs.

In a time of life when so many are confused about their spirituality, Miles thoughtfully looks at his own beliefs, trying to make sense of them and of Alaska’s death.  In the end he does not find comfort in a traditional afterlife, but instead finds his own way.  The book ends with Miles’ final paper for his religion class, on how he will ever ‘get out of the labyrinth of suffering’.  He walks us through his teenage evolution of thinking about Alaska’s death and the afterlife, an evolution that may be familiar for teenagers seeking to make sense of death without religion:

I thought at first that she was just dead. Just darkness. Just a body being eaten by bugs.  I thought about her a lot like that, as something’s meal . . .I thought about the slow process of becoming bone and then fossil and then coal that will, in millions of years, be mined by humans of the future, and how they would death their homes with her, and then she would be smoke billowing out of a smokestack, coating the atmosphere . . . But ultimately I do not believe she was only matter.  The rest of her must be recycled too.  I believe now that we are greater than the sum of our parts.  If you take Alaska’s genetic code and you add her life experiences and the relationships she had with people, then you take the size and shape of her body, you do not get her.  There is something else there entirely.  There is a part of her greater than the sum of her knowable parts.  And that part has to go somewhere, because it cannot be destroyed . . . .We think we are invincible because we are.  We cannot be born and we cannot die.  Like all energy we can only change shapes and sizes and a manifestations . . . Thomas Edison’s last words were: “It’s very beautiful over there.” I don’t know where there is, but I believe it’s somewhere, and I hope its beautiful.

We also find that Miles and his friends seek ways to mourn and remember Alaska without the framework of religion to support them.  They find their own rituals, with Miles discussing that though he does not find comfort in religion, he does find comfort in these rituals.  We continue to see Miles and his friends creating their own meaning in the loss.

Forgiveness
When it comes to guilt, I don’t think there are easy answers to how we make sense of it.  This book doesn’t suggest that we resolve guilt by finding answers or reasoning it away.  That doesn’t work any more than it works in grief.  Instead, what Miles finds forgiveness.  In the end we have the sense that Miles, Chip, and Takumi will always feel guilt and grief, but that (at least Miles) has found an answer to his guilt in forgiveness.

I did not have time to tell him what I had just now realized: that I forgave him, that she forgave us, and that we had to forgive to survive in the labyrinth.  There were so many of us who would have to live with things done and left undone that day.  Things that did not go right, things that seemed okay at the time because we could not see the future.  If only we could see the endless consequences that result from our smallest actions, but we can’t know better until knowing better is useless.

Okay now go pick up a copy.  Make sure you come back and let us know what you, or the teen in your life, thought about it!

8 Things “This Is Us” Gets Right About Grief’

One Comment on "Grief in ‘Looking for Alaska’: A Grief Book Book Review"