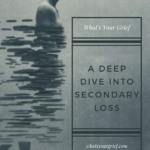 The death of a loved one isn’t just one single earth-shattering loss. In reality, it’s a tremendous loss, followed by a lot of smaller losses in its aftermath.

This domino effect of subsequent losses is called ‘secondary loss.’ Way way back in the early days of WYG, we wrote about these after-effects, and we explained it in the following way:

“Death does not just create a single hole in one’s life. Instead, the loss can impact many areas of one’s life, creating multiple losses from that “primary loss.” Though it is easy to think that our grief is solely the grief of losing the person we cared for so deeply, our grief is also the pain of the other losses that were a result of the death. You will hear these losses referred to as “secondary losses,” not in the sense that their impact is secondary, but rather that they are a secondary result of the primary loss.”

A Surprising Kind of Loss

When you consider the impact of things like death and grief, the inevitability of subsequent loss seems obvious. Yet, grieving people are often caught off guard by these ongoing losses and the way they compound their grief.

This is why we strongly recommend grieving people take the time to assess their secondary losses. Sometimes, seeing all these losses written down can provide a visual for just how complex the experience of grief actually is. In a practical sense, this exercise also helps to conceptualize the things a person might need help coping with.

It’s also important to note that secondary losses are seldom formally acknowledged by supportive friends, family, and community members. I’ve yet to see a sympathy card that reads, “I am so sorry to hear you’ve lost faith in your fundamental belief system.” Or how about, “My most heartfelt sympathies regarding the loss of half your household income.”

Okay, yes, I’m being ridiculous. Nine times out of ten, those cards would come off as horribly insensitive, but therein lies the problem. These losses are often so incredibly personal and sometimes private that it’s difficult for people to give (and receive) support and acknowledgment for them.

Generally speaking, people will often see a grieving person as coping with that one, primary, loss. Even many of the predominant grief theories have been criticized for failing to recognize the impact of secondary loss:

“There has been a lack of recognition of the range of stressors, the multiplicity of losses, integral to the bereavement experience. Not only is there the loss of the person, but adjustments have to be made with respect to many aspects of life.” (Stroebe & Schut, 1999)

Secondary losses confound an already overwhelming loss. These individual losses are unique and complicated in their own right. Add them together and they give intimidating new meaning to the saying, “The whole is greater than the sum of its parts.” Below, we’d like to take a few minutes to discuss just how challenging some of these losses can be.

How Secondary Loss Relates to Other Types of Loss 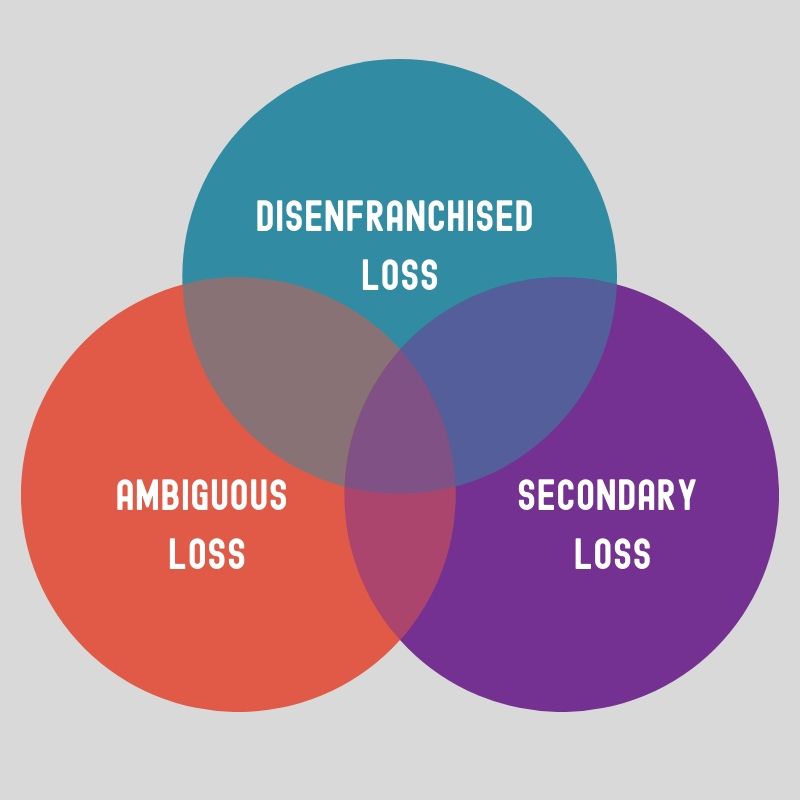 When we talk about ‘types of loss’ or ‘types of grief’ I think it’s important to note that certain experiences might actually constitute several different types of loss all at once. This is quite often true for secondary losses which, among other things, may also be considered disenfranchised and/or ambiguous.

Grief theorist, Ken Doka, originally defined disenfranchised loss as, “Grief that persons experience when they incur a loss that is not or cannot be openly acknowledged, socially sanctioned or publicly mourned”.

As we mentioned above, secondary losses are often very personal (for example, loss of faith or loss of self-worth). Experiences that are personal or private are seldom openly acknowledged, sometimes even by the person experiencing them.

Additionally, secondary losses are usually non-death losses, like losses related to financial stability, sense of self, sense of purpose, and support systems. Sadly, non-death losses often go unrecognized and unsupported. Friends, family, and even those experiencing non-death losses may be more likely to view these experiences as obstacles to overcome than things that need to be grieved.

When a loss is disenfranchised, it means the grieving person isn’t getting the support or validation they need. This means different things to different people. Where one person only needs validation from themselves, another person may feel they need the acknowledgment of their entire family. Regardless, the impact of disenfranchised grief is that the person experiencing it feels alienated, invalidated, ashamed, weak, etc.

What helps? Well, as we suggested above, merely labeling and acknowledging the range of secondary losses you’re experiencing can be a good start. It also helps to know that loss is loss – it doesn’t matter how big or small – and you deserve to take time and space to grieve these things. Also, if you feel you’re not getting what you need from your family and friends, you may want to try a support group or one-on-one counseling.

In all these instances, something significant has changed and these changes usher in a sense of loss. However, a person might feel conflicted and confused about whether they should grieve these losses because the person is still alive and there is often hope that things will change and return to “normal”. Some examples of secondary losses that could be considered ambiguous include:

There’s always more to be said, stay a part of the conversation by subscribing to WYG.

Grieving the Life You Expected: Nonfinite Grief and Loss

Grief After a Breakup: Three Things You Should Know

What Happened to Best Friends Forever? Grieving The Loss of a Living Friend

59 Comments on "A Deep Dive Into Secondary Loss"