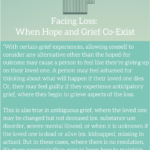 My mother died of pancreatic cancer. If you know anything about pancreatic cancer, you know that the survival statistics are bleak. Those who catch it early have the best chances… but, even then, the five-year survival rate is only about 7%.

When discovered at an advanced stage—such as in my mother’s case, a person may only have a matter of months to live. The doctors gave my mother less than a year, which was consistent with the statistics, treatment options, and everything else that’s known about pancreatic cancer.

There was no reason for us to hope she’d survive… and yet, we did. Though everything was telling us it was illogical, not hoping felt just as irrational. I don’t care what anyone says: It’s darn near impossible to stop hoping that someone you love will live and not die.

We hoped for my mother’s survival right up until her final days, and so did she. And, for a long time afterward, I was angry and remorseful about, what I viewed as, our ignorant optimism.

I felt disappointed, abandoned, and bitter. I blamed hope for stealing our final weeks. For preventing the deathbed moments of quiet repose so often depicted in the movies. Moments, where everyone has accepted the end is near and meaningful words of goodbye can be shared.

The truth was, my mother never wanted to accept or acknowledge she was dying. Even if she had, I was avoiding the entire situation from two states away. There were plenty of reasons why we didn’t have the quintessential “Hollywood Goodbye”… but, if I’m being honest, hope wasn’t one of them.

It’s hard to make a case against hope. It’s associated with many positive effects like increased happiness, health outcomes, and life satisfaction, and helps to buffer the impact of distressing—even life-threatening—experiences. But, over the years, I’ve seen how our wishes for the future can become complicated when they get mixed up with things like denial, avoidance, or black-and-white thinking.

For instance, if a person is only willing to acknowledge partial truths or ignores significant realities, then they may build false hopes on faulty beliefs and misinformation. These hopes have a high likelihood of not panning out, leading to disappointment, frustration, and despair.

In other cases, a person may fixate on their hope for one possible outcome and blindly refuse to acknowledge other possible, or likely, outcomes. Anything other than the desired outcome seems disappointing, unthinkable, overwhelming, or a clear path to forever unhappiness. For example, a person facing a breakup may fail to see the okay-ness—or even potential happiness—inherent in other futures. They cling to the hope that Plan A will pan out… even when it’s obvious it will not.

With certain grief experiences, allowing oneself to consider any alternative other than the hoped-for outcome may cause a person to feel like they’re giving up on their loved one. A person may feel ashamed for thinking about what will happen if their loved one dies. Or, they may feel guilty if they experience anticipatory grief.

This is also true in ambiguous grief, where the loved one may be changed but not deceased (e.g., substance use disorder, severe mental illness) or when it is unknown if the loved one is dead or alive (e.g., kidnapped, missing in action). But in these cases where there is no resolution, it’s more necessary than ever to learn how to maintain hope while also being able to acknowledge and, if necessary, grieve the reality of the present moment.

Pauline Boss, leading expert on ambiguous loss, discussed this in her interview with OnBeing:

“The only way to live with ambiguous loss is to hold two opposing ideas in your mind at the same time. These are some examples: With the physically missing, people might say, “He’s gone, he’s probably dead, and maybe not,” or “He may be coming back, but maybe not.” Those kinds of thinking are common, and it is the only way that people can lower the stress of living with the ambiguity.”

When Hope and Grief Co-Exist

It took me a long time to understand that hope wasn’t the barrier I thought it was. Through the two-dimensional lens of my memory, I couldn’t see how we could have been both realistic and hopeful. I believed that, as long as hope existed, we couldn’t also have had a realistic understanding of my mother’s prognosis or experience anticipatory grief. These things seemed contradictory in my mind’s eye.

Now I realize that without an understanding of the adversity we faced, we would have had no to reason conjure hope. We knew my mother would die, but we really hoped she wouldn’t. We lived every moment in these alternate realities. It was extremely uncomfortable and so I chose to avoid the realities of the situation.  So, in the end, avoidance is my regret, not hope.

Before I started writing this post, I had gathered all sorts of research and information to discuss… things like hope theory. However, as I was writing, I realized this:

Hope is really difficult to define or quantify. Hope is incredibly personal and subjective.

As I struggled with the topic, the Emily Dickinson verse, “Hope is the thing with feathers,” kept circling around in my head. And, though it may sound like nonsense, I ultimately had to concede that individual hope can be described more perfectly with a lyric or a verse than any psychological construct (at least in the way that I’ve seen it manifest in some of the darkest of loss situations).

Share your experience with hope and grief in the comments below. If you prefer to describe hope with a lyric, verse, or quote, by all means, please do.

30 Comments on "Facing Loss: When Hope and Grief Co-Exist"