If you thought the avoidance around death and grief in our society was bad, it is nothing compared to the avoidance of drug-related deaths.  Don’t believe me?  Did you know that overdose deaths outnumber traffic fatalities in the US?  Did you know that someone dies every 14 minutes from a drug overdose in this country?  In 2011 data came out showing that prescription medication overdose deaths outnumbered heroin and cocaine deaths combined.  Overdose deaths outnumbered prostate cancer deaths and are nearing the number of breast cancer deaths.  Don’t feel bad if you didn’t know – that’s the point.  We hate talking about it!

Even as we see celebrity overdose deaths, from Anna Nicole Smith to Michael Jackson to Cory Monteith to countless others, we don’t like to face the terrifying reality that addiction can touch anyone, anywhere.  We don’t want to consider that even with more money for treatment than most of us could ever imagine, people still loose this battle every day.  And even when we hear the statistics, we don’t want to think about the fact that there are real people behind those statistics – real lives lost and real people grieving.

As more and more people are touched by addiction, more and more families are left with the grief of an overdose death.  Yet the unique experience of grieving an overdose death is still pushed under the rug.  It hides out in the shadows.  It is veiled in guilt and shame and stigma and discomfort.   And this isn’t just a social avoidance, academic research hasn’t even faced this topic.  A 2011 article by Feigelman, Jordan and Gorman highlighted the astonishing lack of research in this area.  They noted that despite the significant impact of overdose deaths, “an exhaustive search for entries on grief or bereavement and overdose (or drug) deaths from Med-line, Psych-Info, and the Social Science Index yielded only two research notes on the topic. Both studies were done outside the United States: one a Brazilian study (da Silva, Noto, & Formigoni, 2007), and the other a British study (Guy, 2004).”  Say what?!  Two?? That’s it?? Are you kidding?!

Okay, sorry.  I get a little fired up about this issue.  This year a close friend from high school died of an overdose.  My family has been touched by addiction from many directions and eight years ago my sister’s boyfriend, who was more like family, died of an overdose.  I can think of far too many other friends and acquaintances who have died from drug overdose over the last 10 years.   Results: I get excited that International Overdose Awareness Day exists and I get infuriated that there is so little discussion about the unique experience of those grieving overdose deaths.

Much like suicide grief, there is a complexity in overdose deaths in that people feel like the death was somehow preventable.  This can created an array of complicated emotions, many of which can be linked back to this feeling or belief.  Many of the feelings below, including guilt, shame, blame, fear, and isolation all in some way can be correlated back to this.

Though guilt can be a component of grief from many types of losses, overdose deaths can present many different types of guilt.

There is often a question of the difference between guilt and shame, but it is important to understand the distinction as these can impact someone grieving an overdose death.  There are many different ways you will see guilt and shame defined and contrasted against each other.  Here we mean this distinction as a contrast between a personal experience vs a relational experience.  Guilt is something we feel within ourselves, based on our own perception that we could or should have done in a certain situation.  Shame is something we feel based on our perception that others think we could or should have done something differently.  In the case of overdose death, shame can manifest in various ways.

Please keep in mind that there is another definition/distinction you will often hear between guilt and shame – one that is actually common in substance abuse and recovery.  In this definition people say that guilt is the idea that one did something bad, whereas shame is the belief that one is bad. So, guilt is a feeling about an action and shame is a feeling about the self.  Clear as mud?

Though that is a very important distinction to make, it is not the way we are talking about shame here.  My experience with the word shame, and with the grief experience that accompanies it, is shame in the relational sense – shame that others are judging us or our loved one.

Though there is little research around the grief experience of survivors of overdose deaths, the study by Feigelman, Jordan and Gorman (2011) found a greater incidence of blame among and between parents of children who died of drug related deaths (as well as those who had children die by suicide).  This is both self-blame, as well as blame between friends and family members.  Though this is the first US research to officially document this, it seems pretty darn intuitive if you have lost anyone to overdose or known people who have.  Some common feelings that arise around blame are:

Though we know addiction touches hundreds of thousands of families each year, the family and friends of those experiencing addiction often suffer in silence due to the feelings of stigma, guilt and shame. When someone dies from overdose this isolation often continues from reluctance to talk about the addiction. This can result in:

In the same Feigelman et al (2011) study, 50% of parents who lost a child to suicide or overdose deaths did not find the support that they expected from their significant others, contributing to feelings of isolation.  People say stupid things to us all the time as grievers.  Overdose deaths can bring out some of those especially terrible comments that drive us further into isolation.  People make us feel this death is not as worthy of grief and mourning as other deaths, which throws it in the complicated category of disenfranchised grief.

Addiction is a devastating disease that is difficult to imagine if you have not experienced it within your family, friends, or community.  I struggle writing this to even put it into words.  It turns family members into strangers.  It pins friends and family against one another.  It devastates communities.  Once someone has lost a family member to addiction anxieties can arise (or increase) and become consuming:

All of these anxieties can lead to mistrust between surviving family members and friends.   This anxiety can lead survivors to attempt to control those around them, trying to protect them from addiction and overdose.  These anxieties and attempts at control can become consuming if not addressed.

All of this sounding familiar?  Wondering what you can do to manage this devastating type of grief?  Check our Part 2 of this post here, where talk about some tools and resources for coping with the grief of an overdose death.  Don’t forget to check out the International Overdose Awareness Day website.

Head over to our store and check out our print resource:  Surviving the Grief of an Overdose Death 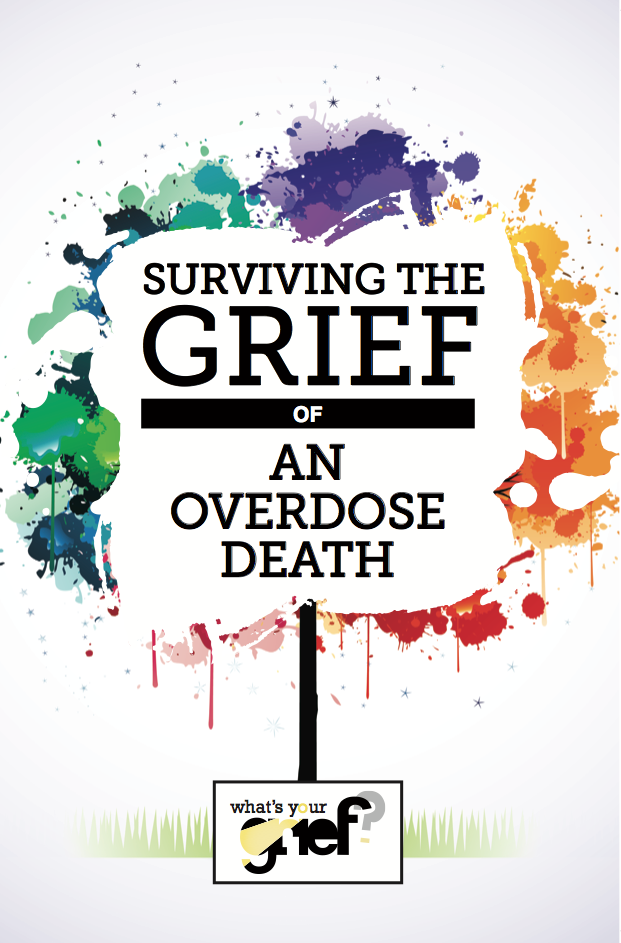 Prefer to listen to your grief support?  Listen to our ‘Surviving the Grief of an Overdose’ podcast below.