When I decided to go see The Fault In Our Stars the day it opened in theaters I should have anticipated that I would be among a sea of 13 year olds.  As I sat through the previews I was getting concerned that the giggles, whispers, squeals and glow of cell phones was going to force me out of the theater before the movie started.  Thankfully, by the time Shailene Woodley hit the screen the din had subsided, though the cell phone glowing and buzzing continued. 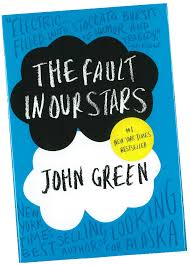 I should probably start by saying that I have a strong belief that movies never live up to books.  They just don’t.  You can’t cram all the crucial details and nuances of 313 pages into a movie, even if it is a young adult book.  That being said, The Fault In Our Stars did a pretty good job of capturing the spirit of the book, and renewing my faith that teens can, and do, love more than just trashy vampire novels.  As waves of laughs, tears, and squeals rose from the teens around me throughout the movie I felt a little more tolerant, as I would far prefer they squeal about Hazel and Augustus than Edward and Jacob.

Now, don’t get me wrong.  TFIOS is a quintessential teenage love story, chock full of flirting, banter, hormones, text messages and teenage angst.  August Waters is perfectly charming, perhaps to a fault.  Hazel Graze Lancaster is smart and witty and the heroine you want a 13 year old girl to love. Not to mention the casting for Hazel was perfect – I can’t imagine anyone doing the character justice better than Shailene Woodley.

WARNING: from this point on spoilers abound.  If you haven’t read the book/seen the movie and plan to, stop reading this post!!

If you aren’t familiar with this John Green YA classic, here is the quick and dirty plot: Hazel Grace Lancaster has stage 4 cancer, relies on oxygen to breathe, but is in treatment with an experimental drug that is keeping the cancer in check.  Charming former high school basketball star Augustus Waters is in remission from cancer that caused him to lose his leg.  Boy meets girl in cancer support group. Smart and beautiful teen romance blooms.  Boy eventually dies when his cancer comes back with a vengeance.

What did I love?

1) TFIOS tackles real issues AND manages to be frighteningly popular.  After fretting for several years that YA fiction was soon all going to be found in the “teen vampire romance” section, a book and movie tackling two teens with cancer was a refreshing change.  Real issues are addressed, real philosophic debates are considered, and there is no happy ending.  If this turns into a trend it will give me hope that the teens of today may someday be better equipped to talk about illness, death and grief.

2) The teenage cynicism is spot on.  Who doesn’t love teenage flirting enmeshed with teenage sarcasm and cynicism?  I, for one, love both.  A good mocking of inspirational quotes, poking fun at the support group that is held “literally in the heart of Jesus”, Hazel is as perfectly jaded as you imagine cancer might make a teen.  Augustus’s contrasting optimism and confidence at times seems over-the-top, but endearingly so.

3) The teenage existential debate is refreshing.  There is an underlying philosophical debate throughout the book/movie about life’s meaning.  Throughout the film Augustus is focused on having an extraordinary life, one that will be remembered.  Hazel, on the other hand, is satisfied with her intimate relationships and meaningful connections.  When Augustus realizes he is going to die without fulfilling his dreams of being someone extraordinary, it is Hazel who furiously argues that he should be satisfied with the life he has, a life with family who love him and with her.

4) Hazel is obsessed with the fate of others after a death.  Hazel reads and re-reads her favorite book, “An Imperial Affliction”, which abruptly ends when a character dies mid sentence.  Hazel is obsessed with the fate of the other characters in the book and the friends and family who did not die.  This mirrors her concern about her own parents and what will happen to them after her own death.  She and Augustus make a pilgrimage of sorts to Amsterdam to get answers from the author, who turns out to be an angry, bitter alcoholic played by Willem Defoe.

5) The cancer isn’t pretty.  Now, to be fair it isn’t even a 1/10th as terrible to see on screen as it could be.  But the movie does try to capture that Augustus, this larger than life, charming, funny, hero is taken down by this evil disease.  Hazel finds him with a horribly infected G tube in his driver’s seat, vomiting and hysterical.  Hazel says that she wishes she could tell us Augustus kept his humor and courage until the end, but that he didn’t.  Though we see this more deeply in the book, I was still glad that Hollywood didn’t try to make the cancer entirely pretty.

6) Hazel and her mom discuss whether her mom will still be a mother after Hazel dies.  Hazel almost died in the ICU several years prior and we see several flashbacks to this, in which Hazel’s mom tells her it is okay to let go and then, crying with her husband, says that she “won’t be a mother anymore”.  Hazel eventually confronts her mom about saying this.  Hazel’s mom apologizes and assures Hazel she will always be her mom, even when Hazel is gone.  For me it is an exchange that speaks deeply to the struggles we face with identity after a death, as well as further exploring Hazel’s multifaceted concerns about the fate of her family after her own death.

7) There are different infinities.  This is a concept that Hazel ultimately uses in the eulogy she writes for Augustus explaining, “there are infinite numbers between 0 and 1 . . . Of course, there is a bigger infinite set of numbers between 0 and 2, or between 0 and a million.  Some infinities are bigger than other infinities . . . There are days, many of them, when I resent the size of my unbounded set.  I want more numbers than I am likely to get, and God, I want more numbers for Augustus Waters than he got.  But, Gus, my love, I cannot tell you how thankful I am for our little infinity.  I wouldn’t trade it for the world.  You gave me a forever within the numbered days, and I’m grateful.”  Come on, how can you not want your 13 year old to love that?!

What didn’t I love?

1) There is a holocaust make-out scene.  Well, I guess that isn’t 100% accurate, but Hazel and Augustus share their first kiss, eliciting squeals of delight from every 13 year old girl in the theater, in the attic of the Anne Frank house.  It is just a weirdly uncomfortable setting for making out.  When people around them started to applaud I just thought, this is too much!  Had I been visiting the Anne Frank house only to see two teenage kids making-out (cancer or no cancer) I am pretty sure I would have been horrified and lamenting the disrespect of our youth today, like a crotchety old man.

2) They couldn’t squeeze the whole book into the movie.  I know I know, this isn’t really a fair criticism, but there were so many great subtleties in the book that didn’t make it in to the movie.  I realize these things had to be cut for time, but I really enjoyed the greater depth in the book of Augustus’s family and their relationship with Augustus and Hazel.  Most importantly, I thought Hazel’s frustration about people’s Facebook sympathy posts after Augustus’s death was so true to the experience of many grievers that I was really bummed it didn’t make it into the movie!

3) Augustus is just too perfect.  To be fair to Ansel Elgort, the actor who played Augustus, I had this same feeling when I read the book.  Augustus always feels ‘on’ and like a bit of a caricature.  Hazel is a female character with a depth you want teens to look up to, but this depth just doesn’t feel matched by Augustus.  Though he is larger than life and charming, I found myself in both the book and the movie wanting more from him as a character.  But hey, we are talking YA love, so I guess I can’t be too picky.

The verdict:  definitely worth a read if you enjoy YA lit, and if you are looking for a movie to see with the YA in your life I would put it on the recommend list.  For those of you who offend easily when watching movies with your YA, you should know there is some mocking of religion, one instance of dropping the f-bomb, and some almost-sex.

Did you see the movie or read the book?  Leave a comment to let us know what you thought!  Subscribe to keep up to date with all our posts.

2 Comments on "The Fault In Our Stars: A WYG Review"