Saturday was International Overdose Awareness Day (I am sure you got that memo if you follow us on social media, because I *may* have been blasting it all day).  A couple of weeks ago I said that this year I wanted to do something to raise awareness and to remember John (my sister’s boyfriend, who died of an overdose) on Overdose Awareness Day.  I struggled for two weeks trying to figure out what that something would be.

To give a little background, when John died the emotions were complicated, as they so often are with overdose deaths.  There was guilt and shame and anger, but at the time so much of my energy was on my sister that there wasn’t a lot of attention to my own grief.  She was struggling with her own addiction.  John’s death reaffirmed all the fears that already consumed us, that we could just as easily be burying her.  I worried what this would mean for her, what support she would need, how she would cope.  To complicate things, at the time there was a lot of skirting around the cause of death.   It was the elephant in the room.   We lived in upper-middle class suburbia.  Pills and heroin were seeping in, but no one wanted to talk about it.  No one wanted to say that more and more people were fighting this battle; losing this battle.

Despite the fact that John had been like a member of our family for many years, I gave very little attention to my own grief.  The fear of what this would mean for my sister was all that I thought about at the time.   It was years before our lives were in a place that I really was able to sit with John’s death in the way I should have- to finally cope with the emotions.   Now, years later, I have been feeling this need to do more to remember him.  He was an only child, and in many ways as close to our family as his own.  Like so many who lose their lives to overdose, he was in his 20s and had so much life ahead of him. So this Overdose Awareness Day I wanted to do something to remember him and to raise awareness around this evil disease that takes so many lives every year.

So what did I do?  Well I started out ambitious and really wanted to delve into the world of public art, since we all know I love public art and graffiti.  Sadly I am a little bit too law-abiding and artistically challenged to do “real” graffiti, so when I saw this post on Oh Happy Day using spray chalk I was inspired.  Tragically, much like my epic fail in making my grandmother’s holiday cookies in her memory (hmmm . . . . maybe I should start planning for a redo on that), this didn’t really work out as I envisioned.  Turns out making a stencil that doesn’t look like crap is more challenging than I anticipated.  The whole going “to Kinko’s to blow [the image] up on their big black and white machine” is more important than I imagined.  Freehand drawing my stencil, for this drawing-challenged gal, didn’t go so well.   Frustration and limited time got the best of me, so I decided to regroup.  Fear not, I will do this project at some point in the future, it just didn’t  come together for Saturday.

One of the things about John that everyone loved, and that was overwhelming when you met him, was that he was always making people smile and laugh.  He was smart, creative and funny, and though his addiction stole so much from him, he was always the first to want to help other people and put good into the world.   I had seen the “Aaron’s Last Wish” project in which a guy is travelling the country leaving huge tips for wait-staff in memory of his brother, who (in his will) said the family should go out and leave a $500 tip on a pizza.  This project had me thinking about John.  After my crash and burn on the chalk stencil, I decided that some variation of this would be a great memorial to John and small way to raise awareness about Overdose Awareness Day.  John was one of those people who could talk to anyone, make people laugh and would always do something nice for someone else.  What better thing to do than make some strangers smile in his memory and spread the word about overdose awareness? 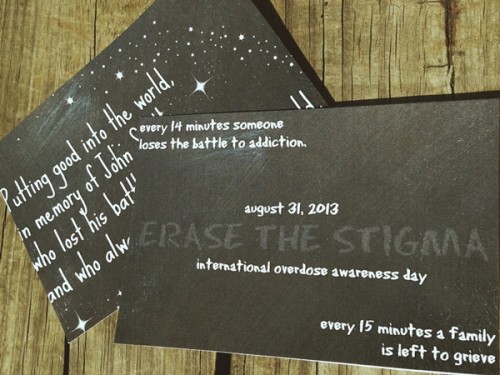 So I made up some little cards about Overdose Awareness Day on one side, and a note on the other about John.  We have already established my crafty efforts often go awry, so these were simple cards made on my computer and printed (much safer than x-acto knives and spray chalk).

I started my day at Red Canoe, my regular coffee shop in northeast Baltimore, for an iced coffee.  I clipped a $50 tip to one of the cards and shoved it in their tip box, grabbed my coffee, and left.  I have to say, though I loved the Aaron’s Last Wish concept, I find the video encounters of interacting with the staff after leaving a tip ragingly awkward.  My goal was to leave my tip unnoticed, hopefully providing a smile for the staff once I was long gone.  The staff working that day all looked to be no older than 20, so I hoped the Overdose Awareness message would be taken to heart or would help one person know they were not alone if their life had been touched by addiction.  I can only hope it did.   Later that day I left a $20 tip clipped to one of the cards in the tip jar at my local snowball stand (after getting a delicious coconut snowball, of course).  I gave a third card to a homeless guy who plays guitar on a corner near our house.  I often give him a dollar, but this time gave him the card with a $20 clipped to it. 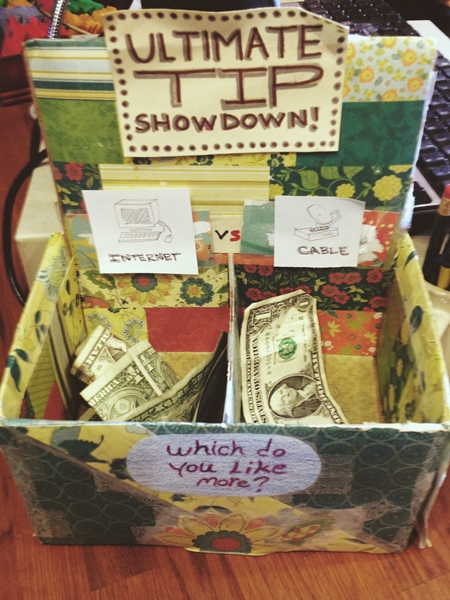 This memorial act was quite a bit cutesier than my original chalk-graffiti plan. I initially was feeling discouraged that it wasn’t what I had wanted to do, seemed pretty small in scope (let’s be honest, I am poor and couldn’t keep up this heavy tipping!) and that I didn’t get to fake-vandalize anything.  But in the end it made me so incredibly happy.   In the words of The Bloggess, furiously happy.   I don’t know why, exactly, but it just ended up feeling like exactly the right thing to do — small and simple, consistent with who John was.   Because you know what?  HEROIN SUCKS.  It lies.  It cheats.  It steals.  It ruins lives.  It ends lives.  Know what else?  Life sucks sometimes. Grief sucks almost all the time.  And it often feels impossible to put the pain of addiction and overdose deaths into words.   Sometimes all you can do is remember the people you love, raise awareness, be furiously happy, and make strangers smile.

Don’t miss some important resources and articles I stumbled on thanks to the twitter OD13 hashtag:

Alcohol and Overdose: the hidden harm

Also, head over to our store and check out our print resource:  Surviving the Grief of an Overdose Death

And if you missed it, we posted some tips for grieving an overdose death right here.

If we had your email address we would send you our new posts right to your inbox.  For real.  So what are you waiting for? Subscribe.

Help for Your Father’s Day Grief

Grief in 2020: The Year of All Firsts and No Firsts

Alone Together: 14 Ideas for a Virtual Holiday

8 Tips for Remaining Present at the Holidays (While Grieving)