Unfortunately, people wishing to support grieving family members and friends often conceptualize their job all wrong. Instead of envisioning grief support as an ongoing need to be met, many times people think of it as something to be checked off a to-do list.  Send flowers – check.  Go to the funeral – check. Make a vague offer of ongoing support – check.  Okay, looks like I’m done!

Now I love checking things off my to-do list as much as the next person.  As an avid procrastinator, I know how good it feels to say – “That’s done!” But, as we all know, good grief support doesn’t work this way. If a person’s grief is ongoing, then grief support ought to be as well.

If you don’t believe me, believe the 1,200 grieving people who recently completed our informal survey about good grief support.  We asked people which responses from family and friends were most helpful in their grief and which experiences had a negative impact. The results showed that three of the four most common experiences negatively impacting grief related to avoidance and/or inaction from family and friends.

It seems to me that the negative impact of these experiences could be somewhat alleviated if supportive family members and friends conceptualized their role as ongoing as opposed to finite.  Now I know talking about grief isn’t easy, especially if you’re worried about saying the wrong thing or if you aren’t comfortable with emotion in general, but the only way for individuals and, for that matter, society as a whole to get better at talking about grief is by doing it. The awkwardness passes; I know because I am a very awkward person so you can trust my authority on this matter. You can also trust that once the discomfort passes (if it ever even existed) there will be the opportunity for things like connection, openness, the sharing of memories, help, and support.

I am sure many of you are now convinced that I am right about everything, so please let me offer a few additional suggestions as you move forward in your role as a supremely supportive person.

It can be confusing, sometimes a person thinks their offering ongoing support when they’re really just checking boxes. It can be tempting to say to yourself, “I offered general support. They know I’m available. They would reach out if they needed someone.” – or – “I offered very specific support and they didn’t take me up on it. The ball is in their court.”

Remaining abstractly available isn’t the same as engaging in ongoing support. Nor is offering specific help and then telling yourself the ball is in their court when the person doesn’t respond or accept. There are many reasons why a grieving person might not respond to offers of support or reach out to ask for help. So, for at least the first few months after the death, just assume the ball is always in your court. You don’t have to be aggressive with it…but…you know…gently toss it around once in a while.

Beware of diffusion of responsibility.

Diffusion of responsibility is a social psychology concept that says people are less likely to take action or responsibility for something when multiple people are present. For example, if I’m one of two people on the street and the other person yells ‘help!’, I’m likely going to respond because I’m the only one there to do so.  However, if we were in a crowd of people I may be less likely to respond because I assume someone else will, perhaps someone who is better in a crisis.

Grieving people are often surprised when they find they have far less support than they might have expected and some of this may be explained by diffusion of responsibility.  It’s not that people wouldn’t help or don’t want to help, but they may assume the person already has the support of other people, perhaps people who are closer or who are better with grief and emotion.

Don’t assume a grieving person has all the support they need simply because you know they have plenty of family and friends.  It never hurts to check in.

If the person you are trying to support doesn’t respond, leads you to believe they need a little space, or declines the type of help you are offering – that’s okay. Try not to take it personally, it’s not about you (most of the time). Be open and accepting of their response, don’t get offended.  Remember, everyone grieves in their own way and at their own pace. Unless the person outright tells you to bugger-off, keep checking in. Make a mental note to text the person in a few days or a few weeks (this, I will allow you to put on your to-do list). It’s always nice to let the person know you are thinking of them.

When in doubt, follow the helpful grief support instructions below. 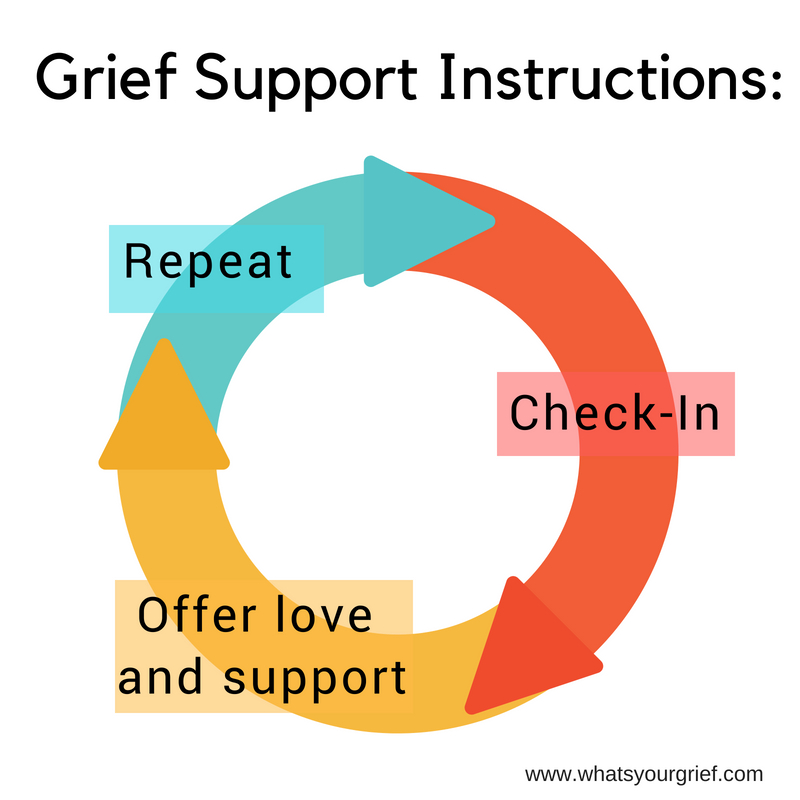 How to Start a Grief Support Group

What to Say to Someone Who is Grieving

Grief is a Social Justice Issue