Sensory memory – memory for things like sounds, smells, and tastes – is the shortest type of memory lasting for only 1/5 – 1/2 a second after a stimulus, like a whiff of perfume or the sound of a baby’s laugh, has ended.  However, I’m convinced that my memories of my grandmother’s house defy this rule. They are so vivid and dimensional that I sometimes think I can smell her old furniture, feel the nighttime air coming in through her open windows, and hear the sound of a record needle dropping on a scratchy copy of ‘Oklahoma’.

In the past, I probably would have taken comfort in this nostalgic flashback. However on this particular night, rather than thinking “how lovely”, my train of thought jumped onto a far darker track and instead I thought “OMG, everyone and everything having to do with this memory are gone.”

I imagined the scene disappearing like a photo developing in reverse.  First, the people faded, then the furniture, then the walls, and then it was gone. Gone from my life and from the lives of others who knew these people and places.

I don’t like to think that certain people and places are gone for good, especially because I took for granted that they would remain constant. I foolishly believed they would always be around to support me, define me, love me, and keep me safe. Is that too much to ask?!? I guess it is because, in reality, people cross our paths and orbit around us in different ways, but their presence is never a given. To illustrate, I’ve created this quasi-helpful chart. 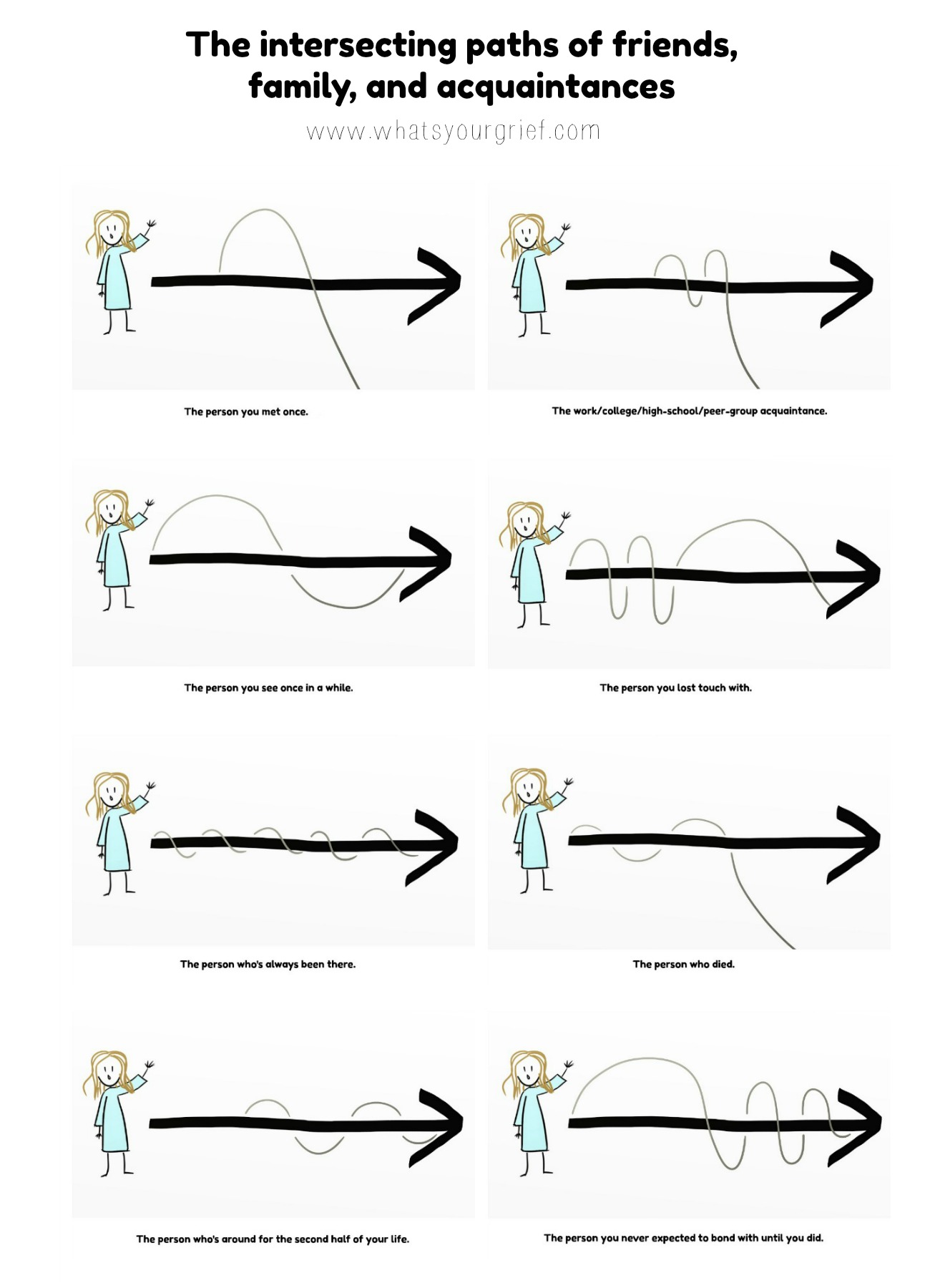 People come and go for varying reasons, and often when you lose one person, you lose other people along with them. When someone dies, for example, people often feel as though their interpersonal losses grow exponentially. Friends and family they thought would be around forever – people they had invested time, love, and hopes in – suddenly became distant and unfamiliar.  As if the experience of losing someone to death weren’t enough to make you ask – “How long before the next person is taken from me?”  – the experience of losing additional relationships often leaves a person wondering – “What’s the use? Who can I count on? How long before the next person disappears?”

On an emotional level, the idea that I’m the only person guaranteed to remain constant in my life makes me feel really alone. I don’t like knowing that relationships are impermanent. I don’t like knowing that as I grow older, I will only have to leave more and more behind. On an intellectual level, I know I’m supposed to say – “treasure the time you have with each person, learn what you can from them, and cherish your memories”. Really, I don’t disagree with any of these things, they just aren’t bringing me the amount of peace that I need right now.

Litsa and I feel bad when we write articles that discuss difficult experiences and/or emotions without offering suggestions for coping with them. Clearly, I’m still searching for answers here, but in an effort to be constructive, I’ll share some of what I’ve come up with so far:

Allow deceased loved ones to play a dual role in your life.

In the theater, one actor sometimes plays dual roles (i.e one or more roles). So, for example, an actor may play one role in Act I and an entirely different role in Act II.  They are of course able to do this because each role only appears in one-half of the show respectively.  When a loved one dies, the physical and tangible role they play in your life ends, but this doesn’t mean that they can’t play a different part in your life going forward. Through your psychological connection and continued bond with deceased loved ones, they can continue to play a role in your life story, it will just look and feel a little different.

Put effort into maintaining a connection with your family and friends.

After a loved one dies, the idea of putting effort towards anything beyond meeting basic needs can seem exhausting. Not to mention, grief can make you feel isolated, alone, alienated, and misunderstood.  Of course it’s okay to get a little lax in maintaining relationships, however, try not to be completely surprised when months or years later you find that you’ve lost touch with people who were important to you.  Here are a few articles that may be helpful when thinking about maintaining relationships in grief:

Focus on your ‘found family’ or ‘family of choice’.

In our in-person workshops, Litsa and I often meet people who have lost all their family. Some people have experienced the death of almost all their family members.  Some people are estranged from family or separated by distance. And some people feel let down by their family, as though their parents, siblings, aunts, uncles, and grandparents didn’t live up to what they believe family should be.  In situations like these, people sometimes cope by surrounding themselves with their found family.

Found families, or families of choice, are groups of people who aren’t related, but who give one another the love and support often associated with “family”. A person may believe that their found family embodies family values – like loyalty, unconditional love, honesty, and trust – more so than their actual family.  If you are someone who feels separated, distant or let down by the people who were supposed to be there for you, it may be helpful to think about the people who are there for you. Although our society often places greater interpersonal value on people who are related by blood or marriage, you may find that your chosen family does as good a job, if not better, making you feel accepted, valued, supported, and loved.

I Miss the Sound of Your Voice: Grieving Sensory Memory

“How Old Would She be Now?” and Other Grief Equations

16 Comments on "Losing Relationships: I hate it"