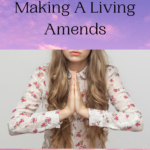 It would be easy to think there is nothing more WYG can write about guilt and grief. We’ve written about how common guilt is in grief (you wouldn’t believe how many people get the “coulda woulda shouldas”). We wrote an article about the difference between guilt and regret. We talked about the complicated processes of self-forgiveness and self-compassion.  We’ve filled you in on things that can exacerbate guilt, like hindsight bias and survivors’ guilt. We’ve given you journaling exercises around coping with regret. With all those articles (that you should go back and check out if you haven’t read them), it would be easy to assume we have said all there is to say. But if you are dealing with guilt and grief, you probably aren’t surprised that there is more to say. Somehow in all this guilt writing, we have never talked about making amends with someone who died.

Guilt is one of those stuck points in grief. Our brain can get caught in a loop. We go back to a moment in time and we fixate on the things we wish we had done differently. It makes it hard to remember things that happened before or after. We blame ourselves for certain things that happened – sometimes rightfully, and sometimes not.

We believe that the only path to forgiveness is asking it of the person we love, the person we believe we hurt, and making amends for what we did wrong. That might not be so tricky if the person were still alive. If you’re reading this, chances are they’re not. You’re left with a mountain of guilt and no one to apologize to, no one from whom you can ask forgiveness or make amends.

So, the big question: what do you do?!

I know I said it once, but I’ll say it again – if you are dealing with guilt and you haven’t read the articles above, now is the time. Seriously. We’ll wait.

Phew, it’s a lot. We know. Guilt is a doozy to unpack. Someone telling you not to feel guilty rarely cures guilt. Self-forgiveness can be a long and complicated process. Teasing out the difference between guilt and regret can be tough. But if you have spent some time with your guilt and still feel confident that what you did hurt another person, someone who is no longer here to give forgiveness, there is another way of coping with guilt that we have never mentioned – making a ‘living amends’.

Wait, what does it mean to make amends?

Amends (n) ə-ˈmen(d): compensate or make up for a wrongdoing.

Like the definition says, amends is something we do to make up for something we feel guilty for. It is different from an apology, which is “a regretful acknowledgment of an offense or failure”. An apology doesn’t include an action that attempts to make up or compensate for that wrongdoing. And then, of course, there is a request forgiveness.  That is also a different ball of wax entirely, one that we have written about here.  The definition of forgiveness: “A willingness to abandon one’s right to resentment, negative judgment, and indifferent behavior to one who unjustly injured us, while fostering the undeserved qualities of compassion, generosity and even love toward him or her” (Enright et al in Enright and North 1998) is one that can be helpful to keep in mind as we think about amends.

Notice the words “right to resentment” and “underserved qualities” in there? Forgiveness is NOT about denying wrongdoing. It is about what we do despite that wrongdoing, “abandoning [our] right to resentment . . . “. This becomes important when we consider amends. Making amends does not undoing the wrongdoing, just as forgiveness doesn’t undo the wrongdoing. Instead, it is an action we take to compensate for what we have done.

But how do you make amends with someone who is dead?

Good question. When someone is alive and you’ve hurt them, amends are more straightforward. You might go to that person and take responsibility for what you have done wrong, express you deep remorse, and ask what you can do to make it up to them. You may couple that making of amends with a request for forgiveness. I am not saying things like that are easy, they’re not. But at least the person is here. We can go to them directly and work through it (or at least try).

When someone has died, things get tricky. Suddenly your spinning around things you feel guilty for. Maybe it is a fight you always thought you had time to resolve. Perhaps it is something you said or did while they were ill. It could be time you wish you had spent with them. Now, whether it is an apology, a want for forgiveness, or an amends, that person isn’t here and it makes it hard to imagine any of those things are possible.

What is Living Amends?

David Kessler discusses a living amends in his latest book, Finding Meaning. In his book he shares the situation of a woman who has a fight with her brother. Though he calls her following the argument, she doesn’t answer. Before speaking with him again, he dies. She is left feeling deep guilt. Though we would certainly suggest she read some of our other posts on seems like regret and self-forgiveness, we also deeply appreciate the option of a ‘living amends’. As Kessler describes, this woman may decide that her way of making amends is to always answer the phone when someone she loves calls after a fight. Though this cannot undo or directly compensate for the initial mistake, it can serve as living amends that comes through a different way of being in the world. Though you can’t directly apologize to the person and compensate for what you did to them, you can consider exactly what you would apologize for and what you would do differently, and still do it differently. In that act, your actions in their memory make you and the world a better place.

As always, subscribe below to get all our new posts to your inbox. And comment if you have an example of a living amends.

11 Comments on "Guilt and Grief: Making A Living Amends"