I can’t remember when we first promised a post on grief and forgiveness and I couldn’t bring myself to look through old posts to figure it out; let’s just say, I hope no one was holding their breath.  Actually, I’ve started the post several times.  In fact, I wrote so much at one point that it became clear to me I had a two-parter on my hands, but then I scrapped everything and decided to started again.

Nevertheless here we are (finally!), ready to deliver part one in our two-part series on forgiveness.  In part one, today’s post, we will talk all about forgiving others.  Later on, in part two, we’ll discuss forgiving ourselves.  Got it?  Good.

Grief is a storm of emotions and one of the most common is anger.  Depending on the circumstance, that anger can radiate in a thousand different directions – anger at someone else, anger at yourself, anger at God, anger at the universe, anger towards the person who died, and so on.

Anger towards the person who died

For some, anger is a new and confusing emotion. Because anger is often considered a negative emotion or attribute, many feel like it’s something shameful that needs to be hidden away; this is especially true if a person feels anger towards a person who’s died.  With age-old expressions like ‘don’t speak ill of the dead,’ it’s no wonder some might feel that acknowledging their anger is as good as besmirching their loved one’s memory.

Of course, there are many instances where people are openly willing to acknowledge their anger towards the deceased; but fully owning one’s anger doesn’t make it any easier to deal with. In,stead many choose to avoid  their anger, ruminate on it and, in many cases, allow it to complicate their grief and impact their emotional health.

First, we’re here to say that feeling anger towards a deceased loved one is totally normal.  There are a zillion reasons why you might feel this way, but let’s just mention a few.

Anger towards someone other than the person who died.

Grief can involve anger towards many people, not just the person who died.  Again there are numerous reasons for this anger, but a few examples may include:

Here is the thing about anger; though it gets a bad rap, anger can actually be healthy and important.  You can read more about grief and anger here.  Anger can be useful, but it becomes a problem when it remains unresolved and starts to inhibit your ability to live in a healthy and content way with healthy and content relationships.

Forgiveness can go a long way to soothe the burn of anger, but for many reasons it can seem out of reach; especially when the person you’re angry at has died or when there is deep-seeded pain and hurt.  People often have misgivings about forgiveness because they think it isn’t attainable, puts them at risk for future hurts, or makes them weak – but none of this has to be true.  This is why we think it’s so important to have an in-depth discussion about forgiveness; to explain what it is and what it isn’t and hopefully make it feel like a realistic and desirable possibility. 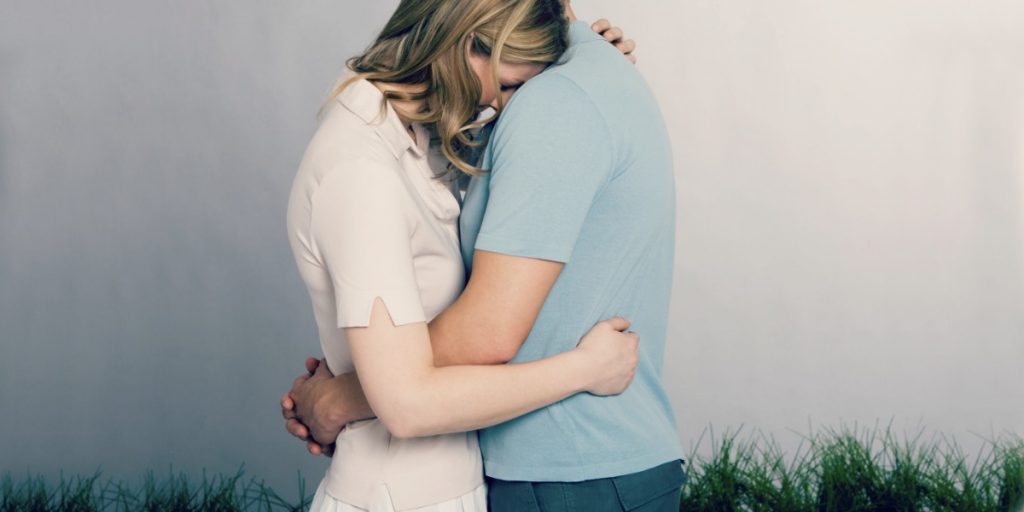 The definition of forgiveness

This may seem obvious, but in reality philosophers, psychologists and others in academia have spent years debating what exactly forgiveness is and (no surprise) they still don’t agree.  So for the purposes of our discussion, I will tell you the definition that we find the most useful.  This definition will serve as a guide as we discuss forgiveness further.

The definition we prefer emerged from the Human Development Study Group at University of Wisconsin.  This group met weekly for years to explore the concept of forgiveness from philosophical, psychological and psychiatric perspectives before finally settling on a definition.  They define forgiveness as,

“A willingness to abandon one’s right to resentment, negative judgment, and indifferent behavior to one who unjustly injured us, while fostering the undeserved qualities of compassion, generosity and even love toward him or her” (Enright et al in Enright and North 1998).

So this means forgiveness is not…

Forgiveness is not eliminating the wrong that someone has done nor does it mean that we excuse a person for what they have done.  As Joanna North has stated in her writings on forgiveness,

This is an important point so I am going to restate it one more time: forgiveness doesn’t mean that you no longer think someone did something wrong!

Another thing that happens in grief that isn’t quite forgiveness, but is important just the same, is that people sometimes realize their anger has been displaced or unreasonable.  Let’s face it, grief can make your feel and act a little crazy.  In your acute grief, your emotions may take precedence over logic and reason; then, later on, you may realize some of your judgements were a little off.  In certain situations you may ultimately realize that it wasn’t forgiveness you needed, but merely to see things differently.

For example, someone might feel anger or blame toward a friend who used drugs or rode motorcycles with their loved one.   After some time griever may come to recognize that ultimately their loved one made their own choices and they might release some of the anger and blame they felt towards their loved one’s friend.  This release can be healthy and valuable, but it is important to recognize that it is not the same thing as forgiveness. Forgiveness is not about realizing blame or anger was misplaced.  To review, forgiveness is about recognizing that a wrong has been done and someone has the right to be angry, yet they actively forgive anyway.

A model for forgiveness

One thing we know from research is that using a specific model as a guide to achieving forgiveness, is actually more effective than relying on general therapy alone (Enright et all in Enright and North 1998).  Though there are several different models out there, the one I am going to talk about is Robert Enright’s model which has further been expanded on by others.  Why this model?  Because I like it! But don’t let that stop you from exploring other models on your own or with your therapist.

Enright’s model involves 20 steps, so I won’t go in to full detail here, but these steps are broken into 4 phases – the uncovering phase, the decision phase, the work phase and the deepening phase (or the outcome phase).  Applying this model of forgiveness has shown clear outcomes in helping people find forgiveness (often people who initially thought they would never be able to forgive).  The below graphic reflects the 4 phases. 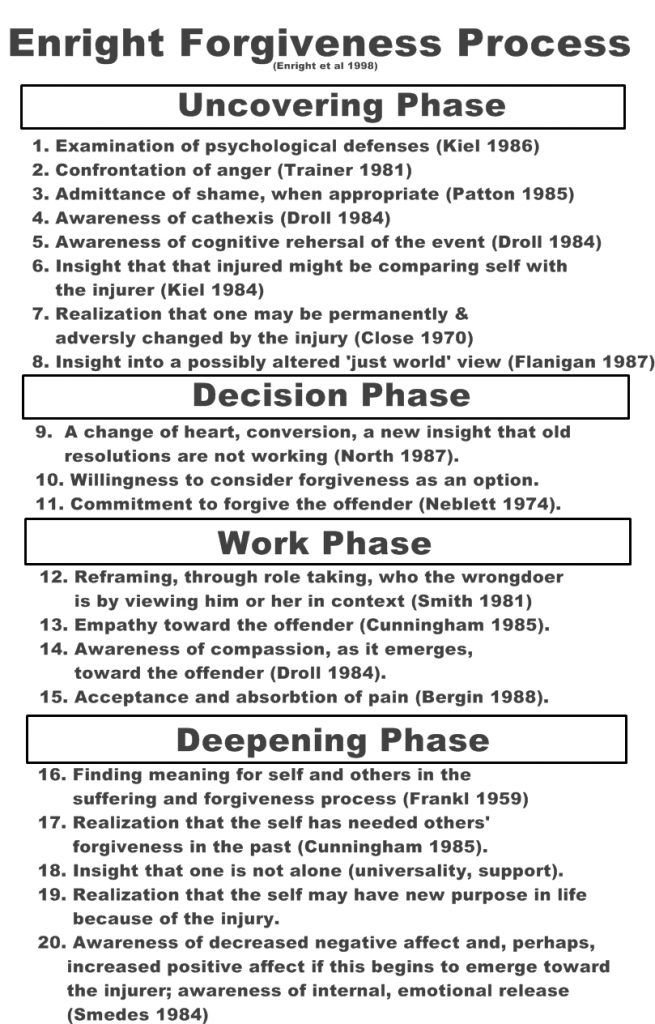 The use of Enright’s model has been linked to decreases in anxiety and depression, with increases in self-esteem and hope (Enright et all in Enright and North 1998).  Fitzgibbons also observed a decrease in anger and hostility, and an increase in ability to control anger, enhanced trust, and freedom from “the subtle control of individuals and events from the past.” (Fitzgibbons in Enright and North 1998).  All exciting stuff, right?  So what does this process of forgiveness look like?

In the uncovering phase, you really dig in to what your anger is all about.  This phase is about acknowledging it, understanding it, etc.  This is especially important if we are experiencing anger that we’re denying or not outwardly willing to acknowledge.  Enright, Fitzgibbons, and others make the point that many people mistakenly believe that the only way to resolve anger is to express it.  In this phase it is important to begin to understand that anger can be dealt with without expressing it.

The work phase, as psychiatrist Richard Fitzgibbons explains, often, “…begins as an intellectual process in which there is no true feelings of forgiveness.”  True forgiveness comes over time and involved working to understand the person being forgiven and the context of their behaviors.  This task can feel impossible at first and progress can be slow, but ultimately empathy can be found and (hard as this is to believe) compassion can emerge.  It is important to remember in the work phase that forgiveness does not cure sadness, hurt, or mistrust; what it can do is help diminish fixations on things like anger and revenge.

The final phase (called the deepening phase by Enright and the outcome phase by Fitzgibbons) involves finding meaning in the forgiveness process.  You may consider times that you yourself have been forgiven by another or you might begin to recognize the positive impact of forgiveness on your emotional and physical health and on your ability to cope with and integrate your loss.

Where to go from here

Forgiveness isn’t easy.  You aren’t going to read this post and magically find forgiveness. Instead, I hope this post may be a first step in considering the possibility of forgiveness. Consider what forgiveness is and what it isn’t.  Consider forgiveness’ benefits to yourself, your mental health, and your grief.  And then, if even just a littlest part of you is open to it, dig a little deeper.

If you have a therapist, talk to them about forgiveness and ask to use a model that is evidence-based (there are others than the one discussed above, like the REACH model).  If you don’t have a counselor, consider finding one and at the outset ask them if they have interest and experience in forgiveness.  If you aren’t ready to take that leap yet, you could begin with books on forgiveness.  A couple of great options are Exploring Forgiveness

by Enright and North (which I have cited numerous times here) and The Sunflower: On the Possibilities and Limits of Forgiveness (Newly Expanded Paperback Edition)

by Simon Wiesenthal. If you are feeling especially philosophical you can check out On Cosmopolitanism and Forgiveness (Thinking in Action)

Dealt with anger and forgiveness?  Leave a comment – your experience might help someone else more than you can imagine.  Stay tuned for our next installment on self-forgiveness – subscribe so you don’t miss it!

25 Comments on "Grief and Forgiveness: Part One"