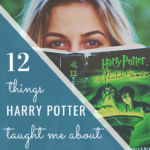 For further articles on these topics:

If you hang out here regularly, you may already know that Eleanor and I are both pretty big fans of Harry Potter. You were probably tipped off when we wrote our very own Harry Potter Grief Theory. That post required a bit of explaining for those who haven’t read the Harry Potter books or seen the movies. Fortunately, talking about grief in Harry Potter doesn’t require much background (though if you haven’t read the books and plan to, there are some spoilers in this list so you should hurry up and read the books. Now. Seriously.)  Death is a pretty significant theme throughout the series and there are lots of different messages about death and grief. JK Rowling, the book’s author, lost her mother shortly after starting the books. So perhaps it is no surprise she weaves grief heavily into Harry’s story. I was 16 when Rowling published the first Harry Potter book in the U.S., not long before my dad died. Though I was a bit older than the target demographic, I read the first book the year after he died and was immediately hooked, in no small part because of the grief themes. All these years later, as a 30-something adult, these themes still stick with me. So, here they are:

Harry’s parents died when he was a baby before he was old enough to really remember them. Harry’s grief for his parents and his relationship with them is a theme throughout the entire series. It’s evident that Harry experiences an ongoing sense of loss because he never had his parents in his life. Not having known his parents doesn’t diminish his grief.

2. Relationships continue even after a person dies.

Harry’s relationship with his deceased parents continues throughout the series and this relationship is portrayed as normal and healthy. Harry learns about his parents through the memories of those who knew them and we see how his understanding of his parents changes as he learns about them and as he himself ages. I kinda doubt that JK Rowling was aware of the Continuing Bonds Grief Theory when she wrote the books. Nonetheless, Harry’s ongoing and evolving relationship with his parent’s memory, despite never having known them, perfectly embodies the ongoing connection many children maintain with deceased parents. This theme is reinforced later in the series with other loses Harry experiences, like Sirius and Dumbledore.

3. Maintaining a relationship with those who died can be wonderful and healthy, but it is important to also keep living.

In the very first book in the series, Harry Potter And The Sorcerer’s Stone, eleven-year-old Harry discovers a mirror that shows him his deepest desires. When Harry looks in the mirror, he sees his parents and other family members who died. After that, Harry becomes just a wee-bit obsessed and he visits the mirror regularly.

“It does not do to dwell on dreams and forget to live. Remember that.”

Many books later, we learn Dumbledore understood Harry’s grief and the pull of the mirror all too well. We learn that Dumbledore lost his entire family very early in life. His own deepest desire, like Harry’s, was seeing his family alive and safe.

4. Grief can make even the most meaningful things in life feel empty and meaningless.

After meeting and building a relationship with his godfather, Sirius Black, Sirius dies and Harry is left to grieve another devastating loss. In the wake of this loss, Rowling writes:

“He would have been so interested to know all this a few months ago, and now it was meaningless compared to the gaping chasm inside him that was the loss of Sirius, none of it mattered”.

In another instance, when Harry is in grave danger, Rowling describes Harry’s apathy:

“Sitting here on the edge of the lake, with the terrible weight of grief dragging at him, with the loss of Sirius so raw and fresh inside, he could not muster any great sense of fear”.

This is a feeling all too familiar to someone who has experienced a loss, but one that few children’s authors are willing or able to depict.

5. Sometimes family members are not the best source of grief support/support in general.

After Harry’s parents die, he is placed in the care of his aunt and uncle who are… pretty terrible. Harry’s aunt and uncle treat him horribly and have little sympathy for his grief. They lie to him about how his parents died and don’t let him talk about or ask about his parents. It is not until Harry ends up at Hogwarts that he finds a community that is supportive of his grief. There he is finally encouraged to develop a closer relationship with the memory of his parents.

6. You can grieve someone who is still alive.

Neville Longbottom is a classmate of Harry’s at Hogwarts. In the fourth Harry Potter book, Harry learns Neville was raised by his grandmother because his parents were tortured into insanity by evil Death Eaters. There is much to Neville’s role in the books and his unique relationship to Harry—so much that we can’t talk about it all. But Dumbledore ultimately helps Harry understand that both Harry and Neville are grieving. Though Neville’s parents are still living, he grieves that they are no longer the people and parents they used to be.

7. People who have experienced devastating losses often see the world in a way that is different than those who have not.

In Harry Potter, this abstract concept plays out in a very concrete way. In Book 5, Harry sees something known as a Thestral, which is a dark, winged horse. Harry realizes that not everyone can see Thestrals and ultimately learns that ‘The only people who can see Thestrals… are people who have seen death’.  We learn that many Hogwarts students have not seen death, and therefore cannot see the misunderstood animals. Harry learns that he, Neville, Luna (and an unidentified member of the Slytherin house) can also see them. Though many fear them and see them as bad luck, Hagrid explains to the students that, “They’re dead clever an’ useful”. To read more about their symbolism, head here.

8. Life isn’t fair and anyone can die.

You have to hand it to Rowling, she didn’t create a sugar-coated world for her readers. She didn’t give us the happy endings we wanted, especially when killing off characters like Sirius (still not over that) and Dumbledore (or that). Harry already lost both his parents as a baby… It just seems mean and unfair that these surrogate parents should have to die too! But even in the fantasy world of Hogwarts, we see the reality of life and death. People die—good people, wonderful people, important people—and it isn’t fair, but it’s true. If you forgot how devastating the grief in Harry Potter was, just watch this fan montage in tribute of Sirius Black and it should all come flooding back.

9. We grieve four-legged and feathered friends.

Harry Potter’s beloved pet is Hedwig, an owl who first comes to Harry before he learns he is a wizard when he is living miserably with his aunt and uncle. Though they don’t exactly have an Old-Yeller style bond, the death of Hedwig is devastating. In an interview, JK Rowling once described this death as representing a loss of security for Harry and also as marking the end of his childhood. If this loss crushed you, please accept JK Rowling’s apology. In that same interview, she said she was sorry and knew the death upset a lot of people!

10. Learning things we didn’t know about someone who died is… complicated.

Dumbledore is Harry’s mentor and a father-figure. He was also (literally) about 150 years old so, understandably, there is much Harry didn’t know or understand about him. Needless to say, this is also often true about children and their parents or other adults (who sometimes seem 150 years old). Throughout the series, Harry struggles with rumors that he hears about Dumbledore. He tries to make sense of things by piecing together what he knows with the things he discovers. As a reader (or watcher), we feel this lesson deeply. We, like Harry, put a lot of trust and faith in Dumbledore throughout the series. It is confusing and unsettling when there are things about Dumbledore we don’t know or understand. Later, it becomes clear that there were many secrets that Dumbledore wanted Harry to learn—just not until he was ready to understand them.

11. Depression can be soul-sucking and also difficult to explain.

JK Rowling has been open about the ways in which experiencing both depression and grief have influenced the Harry Potter books. For example, the dementors are introduced as beings that:

“…are among the foulest creatures that walk this earth. They infest the darkest, filthiest places, they glory in decay and despair, they drain peace, hope, and happiness out of the air around them… Get too near a Dementor and every good feeling, every happy memory will be sucked out of you. If it can, the Dementor will feed on you long enough to reduce you to something like itself… soulless and evil. You will be left with nothing but the worst experiences of your life.”

Rowling has shared on numerous occasions that her experience with depression was the inspiration for the dementors. This makes sense when you parallel Rowling’s remarks about her own depression:

“It’s so difficult to describe depression to someone who’s never been there, because it’s not sadness. I know sadness. Sadness is to cry and to feel. But it’s that cold absence of feeling — that really hollowed-out feeling”

12. The people we love are always with us, and that provides us strength.

There are so many Harry Potter moments that one can’t help but see as metaphors for grief. Near the end of the series, though, Harry believes he is about to go to his death. At this moment, the resurrection stone brings forth the ghost-like presence of his parents and other loved ones. His mother tells him they were with him all along. When Harry asks them to stay with him, his mom confirms to him they will always be with him. I know it might sound a little cheesy, but—at a moment when Harry felt so utterly alone—this experience/reminder provided a palpable comfort and strength.

Five Tips for Living With a Grief Monster

Three Books to Bring Conversations about Death, Grief, & Loss into the Classroom

Should I discuss deceased loved ones with my child?

14 Comments on "12 Things Harry Potter Taught Me About Grief"