If I asked you to list a hundred words that describe your grief, my guess is “uncanny” wouldn’t be one of them.  By the end of today’s post I am hoping that “uncanny” makes it to at least #99 on your list, because I think this is a term that may capture a commonly experienced but little talked about grief phenomenon.  It is something we hear from people, but that can feel difficult to put into words.  So, if nothing else, we hope that considering the uncanny nature of grief may give words to something you’ve felt.  Or it may help you think a little differently about your interactions with the world after a loss.  I can feel your skepticism, but bear with me.  And don’t worry, I am going to try to keep this post short and sweet (for fear of letting the philosopher in me come out).

If I ask you to define uncanny and you say something “strange or mysterious, especially in an unsettling way” or “seeming to have a supernatural character or origin” you would be absolutely right, according to all the standard dictionaries.  You would also probably be feeling confused what this has to do with grief.  But, if you know anything about psychological concepts, you may know there is a psychological definition of “uncanny” that Freud discussed and popularized it way back in 1919.  Thinking about this definition is what I think might help us label a grief experience that is worth talking about.

The psychological concept of the “uncanny” was first developed by Ernst Jentsch in his 1906 essay “On the Psychology of the Uncanny”.  He described the uncanny saying, “with the word unheimlich [‘uncanny’], the German language seems to have produced a rather fortunate formation. Without a doubt, this word appears to express that someone to whom something ‘uncanny’ happens is not quite ‘at home’ or ‘at ease’ in the situation concerned, that the thing is or at least seems to be foreign to him”.  He goes on to describe how things that are known and comfortable seem familiar, things that are new and foreign seem unfamiliar and unsettling. The “uncanny” is an experience that defies those circumstances by being both known and comfortable, while feeling unfamiliar, uncertain, and unsettling.

Freud really put this concept on the map when he wrote about it in the context of art and aesthetics, talking about things that are both familiar but create a sense of fear and dread.   The examples he gives are not grief related, and Freud works in concepts of repression that don’t really work for me.  But the basic concept of the “uncanny” is one that I think can help give words to a difficult to explain phenomena in grief: when the world around you, that was once totally comfortable and familiar, now suddenly feels uncertain, unfamiliar, and creates a sense of fear or dread. 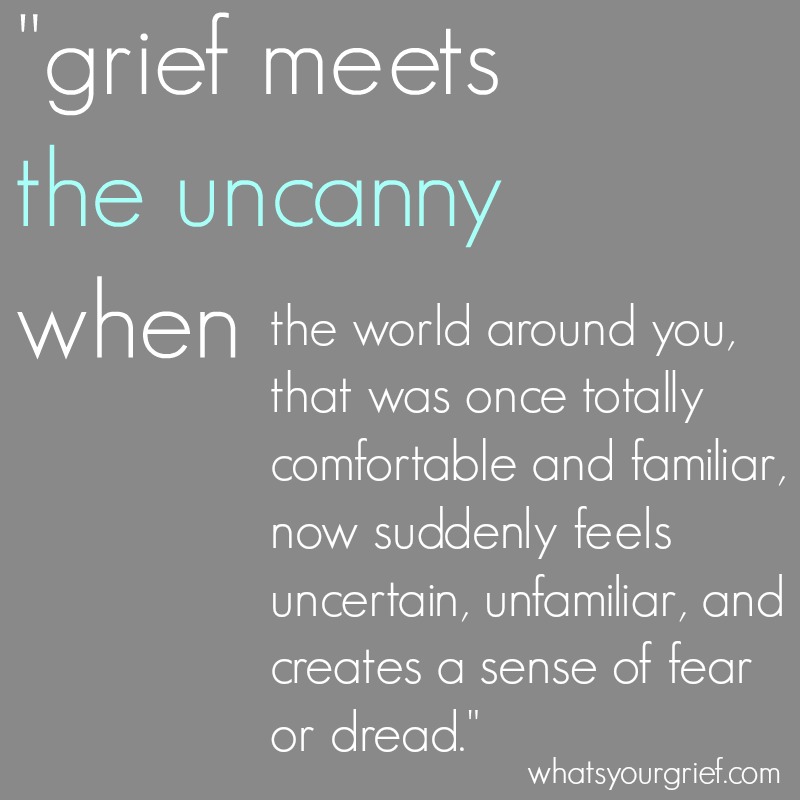 It can be hard to express the pain of grief to another person because there are sooooo many ways it impacts us.  There is our sheer pain not having that person.  There are all the secondary losses we have to cope with and our changes in identity and sense of self.  There are the triggers in the world around us that remind us of the loss.  The “uncanny” describes another painful experience that is worth exploring and labeling, that the sensation of the comfortable, familiar world suddenly feeling foreign and sometimes unsettling that can come up in countless circumstances after a loss.

If you have no idea what I am talking about, let me give you some common examples to consider:

Though it may be your own home, or their house where you spent countless hours over many years, suddenly it feels totally different and uncomfortable.  Without that person there, who gave life and context to the space, there can be a sense of emptiness, discomfort, and even dread around being in the space.  It is simultaneously familiar and totally unfamiliar, giving that feeling that is hard to label or articulate.

It could be you wife’s favorite dress, the one she wore a hundred times, that now looks totally different and foreign as it hangs in the closet.  When my dad died it was his car, which became my car.  When I saw it parked in the driveway I remembered the sight and sound of him driving it, but it just felt like a strange, foreign object when he was no longer alive to drive it. I can remember driving the car, hearing the distinct sound of it in reverse, and feeling so unsettled that a sound that I always associated with my dad was now coming from this car I was driving.  Again, the familiar meets the unfamiliar in an unsettling way.

Holidays are often filled with rituals and traditions.  The decorations, the food, and the people are what create the familiar sense of comfort in holiday traditions.  When holidays roll around after a death, some people run the other way and decide to skip them or do everything differently.  Some people work tirelessly to make everything exactly as it has always been.  In the latter case, there can be an “uncanny” sense that everything is exactly as it “should be” yet things somehow feel uncertain and unfamiliar when the person we love and miss isn’t there.  Sometimes it can feel a bit surreal as you look around at what should feel “right” but instead it feels off or all wrong.

Normally I like to say something helpful and productive at the end of posts, but today isn’t really about that.  This is one of those posts that is about identifying something we have seen and heard people describe time and again, but that we hadn’t really seen described or labeled anywhere.  Maybe “uncanny” doesn’t fit it perfectly, maybe it does.  Either way, if you can relate to this feeling of the familiar suddenly feeling unfamiliar and unsettling in grief, leave a comment to tell us about it!  We would love to collect some of these experiences as we think more about the uncanny nature of grief.

Don’t forget to subscribe to get all our new posts right to your inbox!

Why Does Grief Make You Angry at Friends and Family?

19 Comments on "The Uncanny Nature of Grief"