I have been thinking about the limitations of language a lot lately, specifically when it comes to grief.  When you write and talk about grief as much as we do at What’s Your Grief, you become accutely aware of the ways in which language sometimes fails. There is nothing more frustrating than struggling to find the words to capture an emotion or an experience, especially those that are felt with the intensity of grief.  The reality, of course, is that language will never truly be able to capture the depths of our pain or the complexity of our experience. 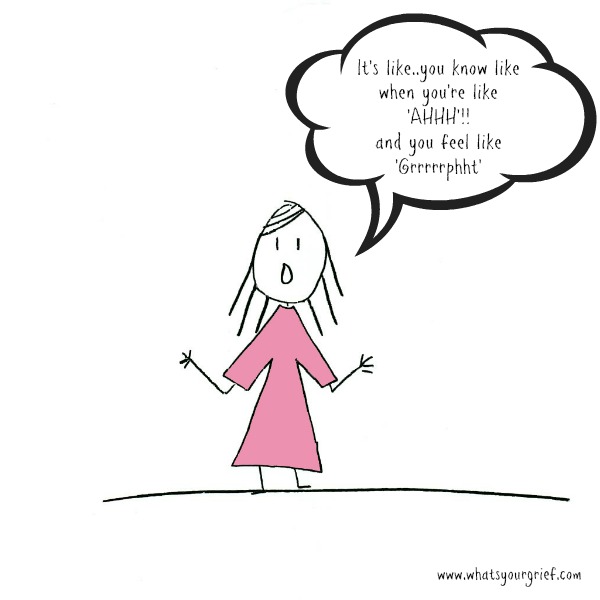 Grief is such an emotional mishmosh (yes, this is a real word) that finding single words or phrases sometimes just doesn’t work.  People still try though, because there is something profound about putting words to an experience.  Sometimes we just want someone else to understand and without a way to communicate we feel isolated and alone. 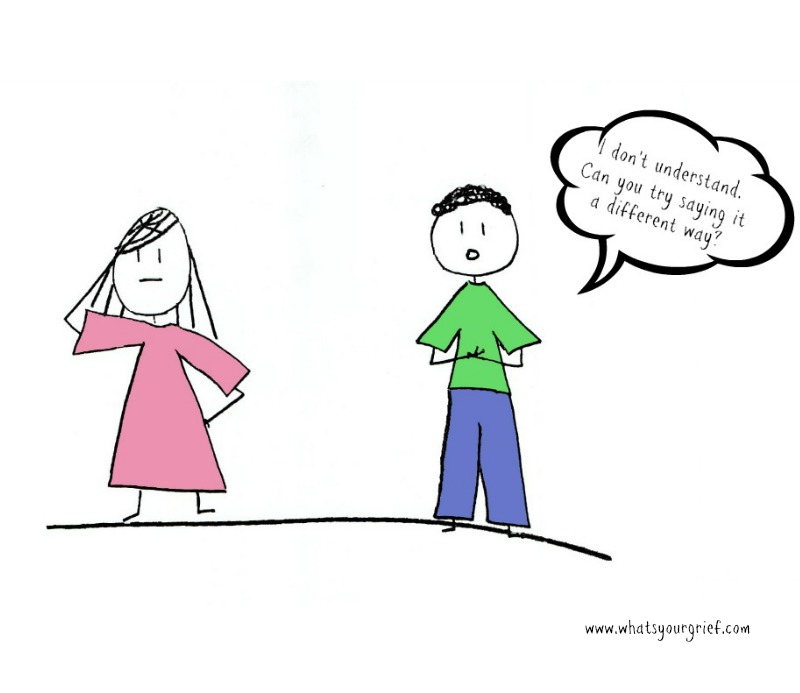 Have you ever known a person or a group of people like family, friends or co-workers, who you find it’s really easy to communicate with? When you’re around these people you can say two words where you would normally need four because you share a common language.  Words give feelings, events, and experiences credibility; they provide a sense of commonality because if there is a word for something, then someone else must have experienced it at some point. 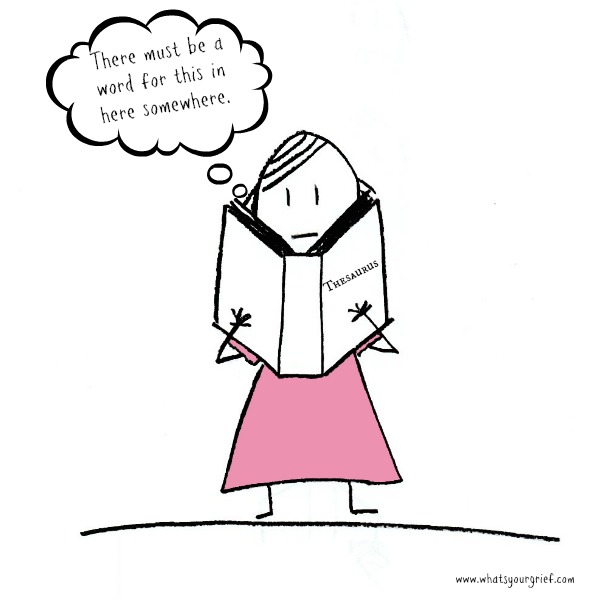 Here at WYG, in our desperation to describe grief, we’ve taken liberties that would make your high school english teacher cringe (as if our typos weren’t bad enough already).  We’ve used nouns as verbs and verbs as nouns; we’ve taken a little of this word and a little of that word and mixed them together to create a whole new compound word; and we’ve straight up manipulated nonsense words to our liking. Luckily there is technically no reason why we can’t just create new words.  Shakespeare created 1,700 new words.  Lil’ Wayne got the word ‘bling’ into the Oxford English Dictionary, so why shouldn’t we be allowed to circulate some new grief words and phrases? 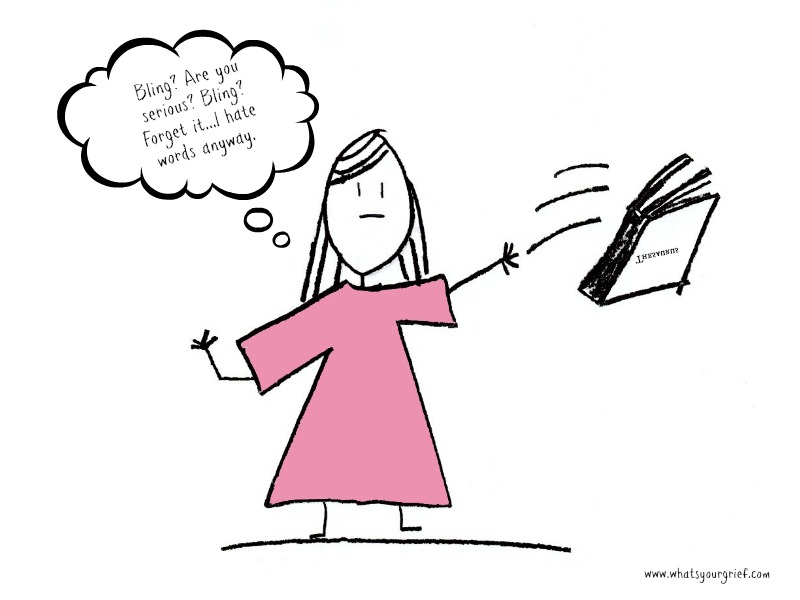 For example, phrases like ‘womp womp’.  Now credit where credit is due, we’re not the first to use the phrase ‘womp womp’, the urban dictionary even has an entry for it.  But in the spirit of Shakespeake, who coined some of his new words by changing the usage of existing words, we suggest that ‘womp womp’ can and should have expanded usage.  According to urban dictionary womp womp is a lighthearted phrase that indicates a loss.; A sound of loss heard on a gameshow. (first womp is a higher frequency sound than the second womp).  According to What’s Your Grief a womp womp is

Yeah, you know what were talking about. Sometimes we just  feel down about everything and it doesn’t matter what others do to cheer us up.   As a reader commented when we first posted about this phrase, “I slide into the womp-womps pretty fast”.   Conveys it pretty perfectly, right?

And how about the phrase ‘grief friends’? If you’ve spent more than 10 minutes at WYG you probably already know that we talk about our grief friends on the regular.  From our own experience and years working with people grieving, we recognize incredible friendships can develop between people who connect over grief.  This can even be one of those friendships where a common language is spoken.  Clearly, there should be a term for this kind of friendship, so we have taken it upon ourselves to regularly work the phrase ‘grief friends’ into our vernacular.  We even podcasted about it here.

Still, there are many experiences where we remain tongue tied.  These are grief-related events and feelings that should have a word, but don’t. For example, someone who has lost a spouse is a widow (or widower), someone who has lost both parents is an orphan.  But for those who have lost a child, we can think of no specific word.  Apparently in Chinese there is a word for a parent who has lost an only child, but this neglects grieving parents with multiple children.  Most commonly we hear the term bereaved parent and, though it works, I can’t help but wish that such an unbelievably devastating loss had its own word.  While you’re working on a word for this, go ahead and get working on a word for bereaved siblings too.

Next up, a word for  horrible day that rolls around once a year . . . the anniversary of a loved one’s death.  Now, the word anniversary of course exists but it just sounds so . . . positive.   Luckily we are not the first to suggest there should be a better word for the anniversary of a loved one’s death.  Many in the stillbirth and child loss community have coined their own word, an “angelversary.” Our grief friend, Anna Winston-Donaldson from the An Inch of Gray blog has suggested our favorite word for this day thus far — a “crapiversary”.  We suspect there may be other terms out there, so let us know your favs.

Wouldn’t it be great if we could create a whole grief-glossary?  Then we could all talk to each other without any confusion ever! Okay, maybe we’re getting a little ahead of ourselves, but sharing a few new words and phrases never hurt anyone when such intense and individual emotions and experiences are involved.  We can only improve our ability to communicate by normalizing and refining the language of grief. 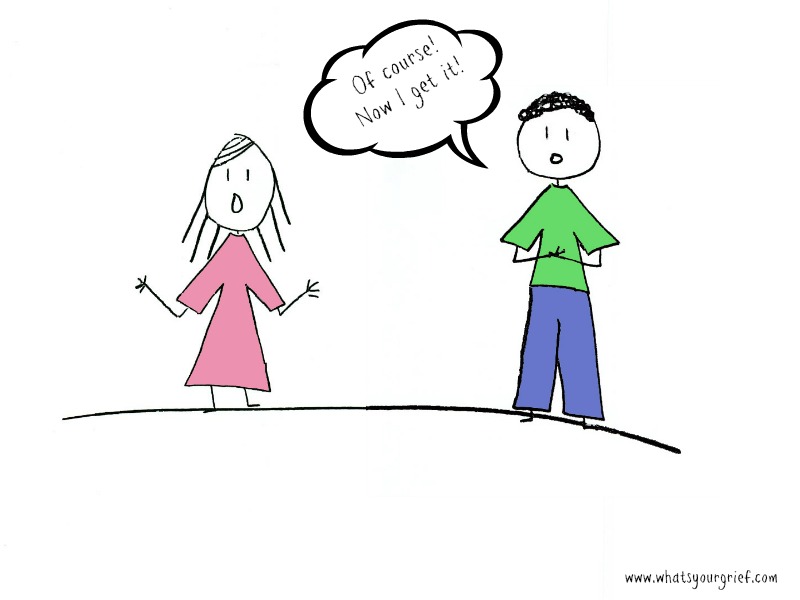 So, we would love to hear from you.  What do you wish there was a word for?  What experiences have you struggled to convey and communicate?  What new words have you learned (or made up) since you started grieving?  Share with us on Facebook, Twitter, or in the comments below.

48 Comments on "The Limited Language of Grief"