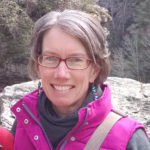 The following is a guest post by Lauren McGovern. Lauren lives in the Adirondack Mountains of northern New York. She is a teacher at North Country School in Lake Placid, NY.

Visit laurenmcgovern.online for more about her and her work.

I was a professional mental health counselor for many years—most of them at an independent school for students in grades 4 through 9—when my teen son died by suicide in 2018. Counseling students and families, delivering social-emotional lessons, and responding to crises is challenging under the best circumstances. The weight of that work, coupled with my shock and pain, was too much to shoulder. By the following September, I knew 2019-2020 would be my last year as the school counselor. Little did I know an event that begins with “p” and ends with “c” would upend all our lives, putting the spotlight on death, grief, and loss across the global stage.

Reading, writing, and reflecting have been mainstays of my life and integral to my healing process. When I moved into the sixth grade English Language Arts position, I knew I could put my clinical background to work… but with renewed energy in the role, using innovative reading comprehension techniques and writing exercises with my students. I wanted to help them discuss death, grief, and loss in a safe and inclusive classroom environment.

Middle school teachers know the world of children’s literature has exploded beyond the late great Beverly Cleary’s wildest dreams. She once explained in an interview that she’d heard from two separate young readers whose parents divorced; they wanted to see their lives reflected in one of Cleary’s novels. The 1984 Newbery Medal winner about a sixth-grade boy writing heartfelt letters to his favorite author, Dear Mr. Henshaw, was her response. Here are three contemporary titles teachers can share with middle grade students—enhancing and encouraging the dialogue about death, grief, and loss.

Rajani LaRocca’s Red, White, & Whole (2021) is a deeply moving novel, told in verse, about a young Indian-American girl, Reha, growing up in the middle of two distinct worlds: one filled with 1980s pop culture and the other with her parents’ traditional culture. While the story is set decades ago, it’s not dated. Rather, it’s filled with the universal themes of grief and loss, whether divorce or death. Toss in some classic mother-daughter conflict with the main character’s unexpected friendship with classmate/crush Pete, and you have a relatable tale for emerging teens.

By the middle of the book, Reha and Pete branch out from their school projects into the scarier territory of real life. Reha’s mother is hospitalized for leukemia and needs a bone marrow transplant; Reha wants to see if her blood is a match, but needles and bodily fluids make her queasy. In the section entitled Hero, Pete tells Reha:

A hero is brave, but not without fear.

Says what they believe is right.

Works to make the world better.

Acts out of love for others.

You check all the boxes, Reha.

At least you’re trying. That’s the first step to being a hero.

That particular passage is ripe for talking about wrangling anxiety and fear in order to take action steps forward when all you want to do is stay silent and inward, hoping you can gracefully back out of the strange and scary life you’ve wandered into.

Later, in the section Jealous, the author revisits the theme of duality, showing two new worlds Reha must navigate in the opening stanza:

I have two lives.

and the one After.

And I am jealous of the whole world.

Everyone who’s suffered their own form of Before and After knows all too well the disbelief, anger, and envy that can resurface during key transition, anniversary, and other milestone moments when a loved one has died. Delegating the time and attention to Reha’s frustration and hurt around both the immediate and future losses can give students either validation or perspective, both critical for growing into empathetic and informed young adults. This lyrical work is an ideal fit for any unit that explores the power of poetry.

Wink (2020) by Rob Harrell follows modern-day seventh-grader Ross Maloy as he struggles with two self-described traumatic experiences: starting middle school and treatment for a rare eye cancer… all this after the death of his own mother to cancer when he was four. Harrell’s book is an amalgam of the gross, the gritty, and the gifts of music rolled together with hilarious illustrations, an original comic (Batpig!), and a mysterious bully on social media.

This novel does an exceptional job of showing the best and worst of friendship, appropriate for middle school but also familiar to those who’ve experienced a drastically different social landscape after the death of a loved one. There’s Abby, the stalwart friend from way back, who isn’t afraid to ask difficult questions and, sometime later, to switch gears to get Ross to see she’s carrying her own pain and problems, too—it’s not all about him. Isaac, a quirky and self-deprecating guy Abby and Ross brought into their friendship circle more recently, is visible but unavailable. Isaac’s disappearance in the wake of the cancer diagnosis understandably leaves Ross shaken and confused. Isaac’s honesty about his reasons for slinking away and his attempts to rekindle the friendship are authentically drawn in the final sections of the book.

Along with those healthy reading response opportunities, Wink lends itself well to writing prompts linked to resilience, reframing trauma, and the growth mindset.

Stella Rodriguez is the plucky 11-year-old main character in Michelle Cuevas’s tale of equal parts science, silliness, and sadness that’s pulled together as a bite-sized post-traumatic growth story of self-discovery. The audiobook version is delightful and the paperback edition features whimsical illustrations.

It’s 1977, when Carl Sagan’s Golden Record, a project to send human sounds to extraterrestrials, is underway. Stella is grieving the loss of her father and their shared passion for outer space exploration. They’d made a recording together and Stella tries to deliver it to NASA. A black hole she names Larry (short for Singularity) follows her home. Adventures ensue featuring Brussels sprouts, younger brother Cosmo, sentient knitted sweaters, and a very smelly hamster. The black hole serves as a metaphor for Stella’s grief; her world has been swallowed up by sadness and loss. How can she go on? How can anyone?

Teachers can highlight the dual themes of grief and growth that permeate this clever work, guiding discussions about the importance of maintaining meaningful connections with someone who’s died and explore how Stella reemerged from her black hole to face a new version of her life with those present. Students may also recognize that in the midst of the pain and sorrow, life can hold some pretty funny moments, too.

In the same way that Beverly Cleary set out to create validating texts for her audiences, these modern authors bring their own cast of original characters to the page. It’s our duty as teachers to connect the next generation of readers to this work, facilitating compelling and compassionate conversations about them.

Five Tips for Living With a Grief Monster

Should I discuss deceased loved ones with my child?

Talking to Kids About Mass Tragedies and Other Events

3 Comments on "Three Books to Bring Conversations about Death, Grief, & Loss into the Classroom"