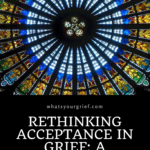 I can’t remember when I first heard about the five stages of grief. But, I do know it must have happened sometime between age seven and age twelve. I was not one of those kids who made it to adulthood without death shattering their world. So, though I don’t remember first hearing the five stages, I know that by age twelve I hated them. Or, at least I hated one of them.

When I was a kid I had a best friend. He lived right down the street. We were born two months apart and our moms reminded us that we knew each other before we were born. His dad and my dad were good friends (“best friends”, we used to tell people). His mom and my mom were good friends (also “best friends”, of course). Our families were best friends. We had movie nights and built blanket forts together. We went on vacations together. Their house felt like my house. His mom felt like my second mom. Then, when we were six, his mom got sick. When we were seven, she died.

I was seven. At that age I knew nothing about the five stages or how I was “supposed” to grieve. I went to the funeral and, as kids, we found our own ways to get through.

Then, when we were twelve, his dad got remarried. I remember the day strangely well. I can picture what everyone was wearing, where everyone was sitting. During the ceremony, I remember looking over at my mom, who was smiling. I remember tears starting to well up, feeling overwhelmed by anger and betrayal. I remember the fear that this meant everyone was forgetting my friend’s mom. It felt like everyone was moving on. My defiant twelve-year-old brain thought one thing: all these adults might be accepting it and moving on, but I won’t. Ever. F*ck acceptance.

My father died when I was eighteen and I immediately started compiling every scrap of paper with his handwriting on it. I didn’t journal so much as I frantically scribbled thoughts and memories in no particular sequence, for fear they’d evaporate. And my twelve-year-old voice was there in my ear: f*ck acceptance. I would never, ever, ever, ever accept that this happened.

After that, I did what so many of us do in grief. I somehow put one foot in front of the other and kept going, having no idea how I was doing it. Keeping approximately a million mental connections to my dad, I spent four years getting a philosophy degree which, in its own way, felt like a protest to acceptance.

During those years I tore through pages written by thinkers and writers who, for centuries, had been trying to make sense out of a universe that didn’t make sense. And, largely because I was surrounded by college friends who had very few preconceived ideas about what my grief should look like, no one told me I needed to accept anything or move on. I count myself lucky for that.

When I finally found myself working as a clinical social worker in grief, I learned I wasn’t alone. I was suddenly flooded by people who hated the word acceptance.

The reasons were all the reasons you would guess, reasons you might have felt. It sounded like resigning oneself to what happened. Or worse, saying you were okay with it. It implied that there was some endpoint to grief, after which you accept and things go back to “normal”. It is tucked at the end of the five stages, which sounded so neat and tidy, when grief was neither neat nor tidy. Many people grieving just didn’t seem like the idea that they should be striving for acceptance in order to heal.

But what does acceptance in grief mean?!

Now, don’t go assuming ‘acceptance’ is a part of all grief theories. I have found other grief theories that better reflect my personal experience. They don’t involve the word “acceptance”.

As you know if you hang out around here, we love the Continuing Bonds Theory and the Dual Process Model of Grief. We find those resonate more with us, and often with those we work with.

That said, I also know that so much misunderstanding exists around Kubler-Ross’ work. Most people don’t know her theory was developed as stages for people who were dying, not those who were grieving. Out of her hundreds of pages of writing, most people only know those five simple: denial, anger, bargaining, depression, acceptance. From there, they make assumptions, define things themselves, take a guess. I knew if I wanted to hate acceptance (and I did) I needed to know more than just the word.

When I first read Kubler-Ross’ book, I was fascinated by her actual definition of acceptance. Acceptance, she says: “is often confused with the notion of being all right or okay with what has happened. This is not the case. Most people don’t ever feel okay or all right about the loss of a loved one.  This stage is about accepting the reality that our loved one is physically gone and recognizing that this new reality is a permanent reality.

We will never like this reality or make it okay, but eventually, we accept it. We learn to live with it. It is the new norm with which we must learn to live. This is where our final healing and adjustment can take a firm hold, despite the fact that healing often looks and feels like an unattainable state.

Healing looks like remembering, recollecting, and reorganizing . . . we must try to live now in a world where our loved one is missing . . . In a strange way, as we move through grief, healing brings us closer to the person we loved. A new relationship begins. We learn to live with the loved one we lost”.

For all that ‘acceptance’ aversion I had, that others have, I can’t say I disagree with Kubler-Ross. No doubt you have to accept that your loved one is gone.

This “new reality” is the “permanent reality”, whether you like it or not. All you can do is figure out how to live in that new, permanent reality. Plenty of other grief theorists, before and since, have asserted exactly the same thing.

As I first explored Kubler-Ross in earnest, what became clear was that I didn’t disagree with her concept of “acceptance” once I read about it. It just didn’t feel particularly useful or instructive. With all the assumptions I made about the word stripped away, I no longer felt disdain for acceptance. Instead,I felt a bit indifferent. It just felt . . . obvious.

Surprisingly, by the time I finished graduate school, I was thinking a lot about acceptance again. I had become a big fan of a therapy called Acceptance and Commitment Therapy. ACT for short. Unexpected as it was, I had been drawn to a therapeutic approach with ‘acceptance’ right at the center.

A new idea of acceptance

The ‘acceptance’ of Acceptance and Commitment Therapy was different than all my previous understandings of acceptance. Like Kubler-Ross’ definition, it didn’t mean being okay with anything. But, unlike simply accepting the permanence of the new reality, this acceptance felt more active.

Rather than embracing “good” feelings and experiences and quickly trying to escape “bad” or “negative” experiences, he describes a state in which all emotions have a place. Though there are some variations of the definition, this one sums it up well: “psychological flexibility is coming in full contact with painful experiences and with uniquely chosen values while consciously choosing to act and engage in a meaningful life”.

Hayes tells us to think of acceptance from the Latin root of the word. This isn’t to resign oneself or be okay with something. Rather, it is to accept something that is given to you, like a gift. And let’s be honest, we’ve all accepted a gift we really didn’t like from someone.

He suggests that the art of living in a meaningful way comes through learning to ‘accept’ all the experiences that our lives have given us. The good experiences, and the brutal and painful experience. The love and loss.

So, rather than seeing ‘happiness’ as a state of pleasure, devoid of pain, Hayes says instead that “happiness is living in accord with your values in a way that is more open and accepting of your history as it echoes into the present”.

That history for most people, certainly for those of us grieving, is a very mixed bag. It isn’t being grateful for that past. It isn’t being glad that it happened. Instead, it is acknowledging the reality of that past and accepting that history as part of our wisdom in the present. It is part of who we are.

We can disconnect from difficult experiences and emotions, like those that come up when we think of the person we love who died. But in doing so, we disconnect from the love and power in our memories, from comforting connections, and from a past that can propel us closer to our values.

So now, all these years later, acceptance occupies a very different space in my grief. Acceptance is not resigning ourselves to a past we then put behind us. Rather, acceptance is creating a space to bring that past with us, the most beautiful parts and the most painful parts.

It is what allows me to create a space that is fully open to my history – to all the losses and the pain that came with them. To all the memories and stories and connections that carry into the present. To the way that pain and loss have shaped who I am.

The way that grief has allowed me to more deeply connect to the values that mean the most to me, to live in a way consistent with those values. My twelve-year-old self never would have guessed it. But then again, she probably wouldn’t have guessed much about who I am today.

Have your own musings and rambles on acceptance? Leave a comment. And subscribe to get all our new posts right to your email.

7 Comments on "Rethinking Acceptance in Grief: A Love/Hate Story"