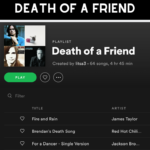 For further articles on these topics:

This post has been weeks in the works, a promise ever since I wrote When Your Best Friend Dies a few weeks back. Sorry, we have been pretty busy and I have just gotten my head back above water. So, in this post, we’ll share sixty-four songs about the death of a friend (in no particular order).

We always struggle with the best format to share song lists on the website. We’ve done text with links to the YouTube video, we’ve used iTunes playlists, we’ve used a playlist website that went under. We have no idea what the best option is!

Today I am going to give a Spotify a try… we’ll see how it goes. Keep in mind you have to scroll on the right-hand side of the box to see all the songs.

For those who don’t use Spotify, we’ll list the songs below so you can make your own playlist wherever you listen to music.

1. Fire and Rain by James Taylor

3. For a Dancer by Jackson Browne

6. Song for Josh by Frank Turner

7. Life Without You by Stevie Ray Vaughan

9. Stars by Grace Potter and the Nocturnals

10. The Crossroads by Bone Thugs-N-Harmony

14. They Reminisce Over You by Pete Rock & C.L. Smooth

15. The Last Carnival by Bruce Springsteen

18. I Sill Miss You by Keith Anderson

19. You’re Never Over by Eminem

23. The Needle and the Damage Done by Boc Guru Special, Neil Young

28. Connecticut Steps by Into It. Over It.

30. Who You’d Be Today by Kenny Chesney

32. Black Gives Way To Blue by Alice In Chains

36. It’s A Shame About Ray by The Lemonade

38. Gone Too Soon by Michael Jackson

39. You Should Be Here by Cole Swindell

40. Boulder to Birmingham by The Fray, Emmylou Harris

43. Dancing in the Sky by Dani and Lizzy

45. Back on the Chain Gang by Pretenders

50. So Far Away by Avenged Sevenfold

52. I’ll Remember You by Thea Gilmore

56. All Those Years Ago by George Harrison

58. What Sarah Said by Death Cab for Cutie

61. Hear You Me by Jimmy Eat World

64. Dondante by My Morning Jacket

P.S. Leave a comment to add your favorite songs about the death of a friend to the list.

P.P.S. As always, subscribe to get all our posts right to your inbox.

We wrote a book!

After writing online articles for What’s Your Grief
for over a decade, we finally wrote a tangible,
real-life book!

After writing online articles for What’s Your Grief for over a decade, we finally wrote a tangible, real-life book!

What’s Your Grief? Lists to Help you Through Any Loss is for people experiencing any type of loss. This book discusses some of the most common grief experiences and breaks down psychological concepts to help you understand your thoughts and emotions. It also shares useful coping tools, and helps the reader reflect on their unique relationship with grief and loss.

What’s Your Grief? Lists to Help you Through Any Loss goes on sale September 27, 2022, but you can preorder at the following retailers:

To Me, From You: Writing Letters From Those We’ve Lost