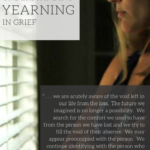 I’m a yearner; always have been and always will be. I ache for days and moments that exist only in the past. Childhood moments mostly, the majority of which involve my mother. These memories are particular to me and so I won’t bore you with them. Because yearning in grief is incredibly common, instead I’ll leave a blank space where you can insert memories of your own.

I don’t mean the kind of memories that you fondly recall, though, rather those that involve people and places you long for so much that they make your stomach hurt. The ones that suddenly cross your mind out of nowhere and take your breath away. If you are grieving the death of a loved one, as many of you are, I’m sure you have some idea what I mean.

Yearning is actually one of the most common grief reactions, so I’m surprised how little it’s explored in grief literature and research. I’d like to say that What’s Your Grief has bucked this trend, but before today we’ve admittedly only written and 1/2 a post on the topic.  As someone whose heart is constantly clawing and stretching to grab hold of the past, this disappoints me.

In this article we want to start a conversation about yearning in grief and loss. In the interest of learning more about the concept, we invite you to share your experiences in the comments below.

According to the Oxford Dictionary to ‘yearn’ is to,

“Have an intense feeling of longing for something, typically something that one has lost or been separated from.”

The Germans have a similar word – ‘sehnsucht’ – which has been defined as,

“A high degree of intense (recurring), and often painful desire for something, particularly if there is no hope to attain the desired, or when its attainment is uncertain, still far away.

Although it doesn’t have an exact English translation, I think ‘sehnsucht’ comes closest to encapsulating the intense emotional state of yearning experienced after the death of loved one.

What can you yearn for?

“Yearning is an emotional state widely experienced in situations involving loss, focused on a desire for a person, place, or thing that was treasured in the past.”

You can yearn for all sorts of people, places, things, moments, relationships, etc. If it’s significant enough to grieve, then it’s certainly important enough to yearn for.

How is yearning experienced in grief?

Despite the lack of yearning related research, grief theorists have been conceptualizing yearning as a grief phenomenon since early on. Remember when we wrote a post about the grief theory Bowlby and Parkes proposed back in 1970 called The Four Stages of Grief? Okay silly question, but to recap Bowby and Parkes said that the second “phase” of grief is “yearning and searching”.  Here’s how we explained this phase in the article:

“In this phase we are acutely aware of the void left in our life from the loss.  The future we imagined is no longer a possibility.  We search for the comfort we used to have from the person we have lost and we try to fill the void of their absence.  We may appear preoccupied with the person.  We continue identifying with the person who has died, looking for constant reminders of them and ways to be close to them.”

Bowbly and Parkes laid out their theory over 40 year ago, so how does it stand up to the test of time? With regards to yearning, subsequent studies have indeed confirmed that yearning is a common grief emotion.

In fact, in a 2007 longitudinal study of 223 bereaved individuals, researchers found that among the grief responses disbelief, yearning, anger, depression, and acceptance of the death, acceptance and yearning were the two most common grief responses. Researchers observed that yearning rose until around 4 months postloss, at which point it typically started to decline (Maciejewski, Zhang, Block, & Prigerson, 2007).

Is yearning a good or bad emotion?

Grief research and literature often refer to emotions as either positive or negative, and although this can be useful for purposes of defining, testing, categorization, and comparing, such labeling can be misleading for our everyday purposes. Instead, we find it useful to consider most emotions on a continuum where it can be either good or bad, depending on the person experiencing the emotion, how they cope with the emotion, and the overall impact of the emotion on the individual’s life.

In the 2007 study referenced above, yearning was the most commonly endorsed “negative” emotion; Bowlby and Parkes proposed that if a person cannot progress through the ‘yearning and searching phase’ that they will get stuck trying to fill the void of their loss; and complicated grief researchers note that complicated grief is, “characterized by an intense and prolonged yearning for the deceased.”

On the other side of the spectrum, I think many people would say that they don’t believe their yearning is completely negative. Some grief researchers agree to a certain extent, noting that yearning can evoke bittersweet positive emotions and provide comfort to people who are grieving by bringing them closer to memories of their loved one.

“A team at Southampton found that nostalgia was a very common experience with 80% of their 172 participants stating they experience nostalgia at least once a week and 42% indicating they experience it at least three or four times a week. Most interesting to us though is the finding that one of the most common triggers of nostalgia is negative affect. Which suggests that we are apt to access memories of a happier times in an attempt to counteract negative feelings like fear and anxiety in the present.

Also, their findings support the idea that nostalgia has the capacity to generate positive affect, bolster social bonds, and increase positive self-regard. So, when a social situation is one that is apt to trigger anxiety or fear, nostalgia about relationships from the past can help boost confidence in ones ability to interact, open up, and bond with others.”

Before writing this article, I discussed the topic of yearning with WYG co-founder, Litsa. We both agreed that we personally have positive feelings towards our grief-realted yearning.  Years after our losses, we are able to see how yearning has been, and continues to be, both useful and comforting.

Might someone with a more recent loss disagree?  Heck yes.  So we’ll leave you with these final words. When conceptualizing yearning, it’s important to acknowledge that it’s a common experience. It’s also important to understand that your feelings towards yearning may be ambivalent and/or change over time.  Grief is about the loss of something wonderful and so yearning, and many other grief-related experiences, are inherently a mix of happy, sad, good, and bad.

39 Comments on "Yearning in Grief and Loss"