When you’re having a rough couple of days and feeling sad and down, it is almost never a good idea to do the one thing you’ve been putting off because you know it will make you feel wretched. This is what any good friend would have told me on Monday when I finally opened the e-mail containing my mother’s treatment journal after staring at it in my ‘New Mail’ for 10 months.

I vowed in January that my ‘Coping-With-Grief-News-Years-Resolution’ was to read this journal and by gosh I was going to do it. Why did I choose a day when I felt like I could cry over a slight shift in the wind? What can I say? Sadness likes sadness; the abyss attracts the abyss as they said in Latin. I’m not sure that’s how they meant it, but it works for me.

So, this is how I found myself sobbing as I scrolled through a PDF file documenting appointment after hope-sucking appointment. The journal is painstakingly written by hand, my mother’s cursive handwriting showing the tell tale signs of her emotional state – neat and tidy when discussing facts like blood pressure and appointment times and drunkenly weaving outside of the lines when she ventures onto the dark roads of fear, future, and family.

It’s weird reading my mother’s treatment journal because I realize I wasn’t really there for any of it, physically or emotionally. On the surface I 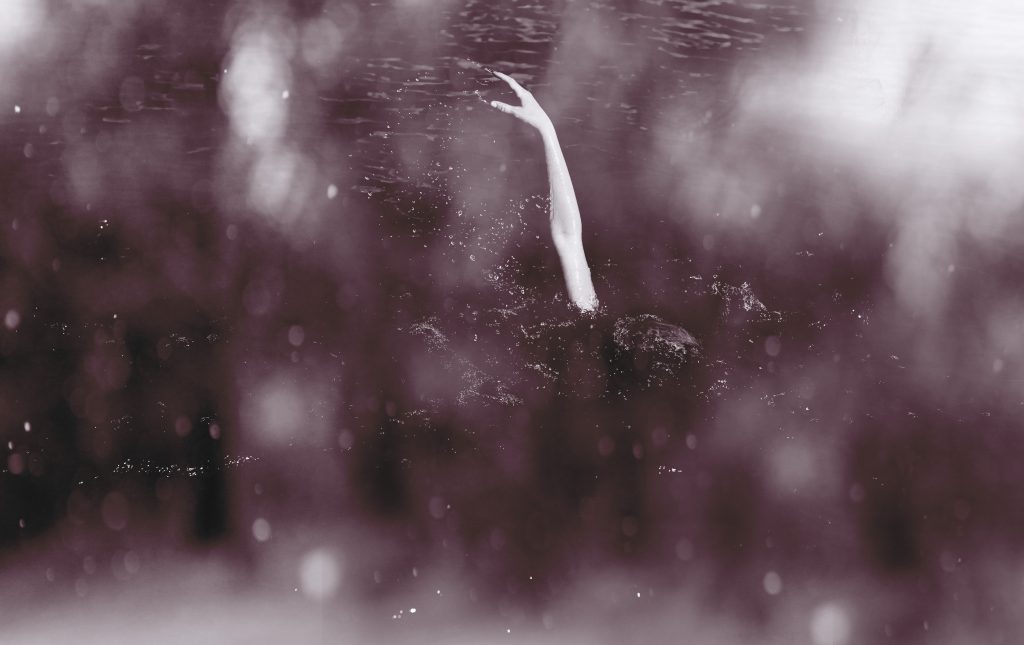 was two states away planning a wedding and a new life. I was holding it together well and would dutifully check in from time to time, distracted but concerned. Under the surface though I felt like I was drowning.

The minute I understood what was going on I ducked under the water and stayed there. It seemed so peaceful and quiet. The noises from above we’re diffused and muffled, time paused and thoughts moved in slow motion. The waves would rock and lull in soothing rhythms and the startling splashes that crashed on the surface were transposed into smooth and shrill melodies. We all have regrets (don’t try and tell me we don’t) and swimming away from my mother’s death is one of mine.

My mother went in to the doctor on a Thursday in October for her regular blood pressure check and during that visit she told her doctor she was experiencing severe indigestion. Complete and total upper body discomfort, whether she ate or not, night and day.

My sister remembered her complaints starting in the summer, which seems about right to me because I recall her talking about the constant pain sometime around early September. We we’re having lunch at the mall and I’m fairly sure I was eating a stupidly large ice cream sundae.

We had spent the day shopping for a rehearsal dinner outfit for my upcoming wedding. She helped me pick out a perfect fall outfit made of ivory lace. Although my mother did very little shopping, she always had good taste when it counted. I don’t know why but I never wore that outfit. Now it won’t even fit me so I guess I never will, but just the same it sits in a chest in my bedroom. I have an inexplicably hard time parting with clothing purchased for me by my mother.

According to my mother’s journal she waited the whole summer to say something to her doctor because she didn’t like “throwing too much at him” and she regretted it afterwards because of how long she let the cancer grow. It’s impossible to know if anything would have changed had she said something sooner. Part of Pancreatic Cancer’s lethality is its sneakiness and, like my mother, most people don’t know they have it until it’s too late. Either way, we’ll never know.

It took several appointments and procedures before her doctor could tell her what was going on, and of course he never clued my mother into his tentative diagnosis. Although she sweetly downplayed her suspicions of him, she felt it warranted a ‘double hmmm’ when a normally sullen and closed off man called her days before her scheduled CT scan to ask her ‘how she was

doing‘ and suggest moving the test up a few days.

Monday October 30th: “I went to work on Monday. John, who had cancelled his ‘Merry Widow’ in Indianapolis (an absolute first for him) stayed home to answer the phone. He and Sarah came running out the door when I pulled in at noon. I thought it was good news. “

I was leaving a night class when my Dad called. He didn’t have to say a word, I could tell by his voice. I’ve heard that voice only once since, when my brother got in a terrible car accident, and now every time I answer a call from him I feel a slight twinge of fear I’ll hear it again. I remember the exact

turn I was making when my father gave me the news – Charles Street to Northern Parkway – Nonnie..it’s the worst case scenario…it’s Pancreatic Cancer.

I can feel the pit in my stomach just thinking about it, it’s the one you feel when you know something horrible has happened and there’s no way out. This is probably not why they call it a ‘pit’, but the analogy works for me.

The days afterwards we’re a blur. My father and my siblings busied themselves scouring the internet; reading about the disease, the odds, and searching for miracle treatments. Days of scurrying, reaching out to contacts at this trial and that, phone calls with the insurance companies, deciding who should be where and when. My mother just wanted someone to tell her what to do. She stopped playing the piano, stopped flipping through Christmas catalogues, and struggled to make sense of things.

My mother’s handwritting flows across the page as if she we’re writting in a row boat on a rocky sea,

“I really believe God already knows the outcome if it’s bad. I’d like all the prayers to change his mind. I’m still needed – my income – my help

when Flo’s cancer gets out of hand…I want to help Jessie when she delivers those twins. Heck! I need to see those twins. I want to see Sarah’s children. I need to be with my Beth – she’s still too young for this.

There are blessings – John loves me so and he’s dropped everything for me. The kids have rallied. He needs them so and I think my starting to study the Bible this summer was no coincidence….But what do I know about Gods plan? But I know he has one.”

Tuesday November 8th would be her first Cancer Treatment and in between there we’re still more conversations and decisions. My mother felt empathy for her poor doctor although she called him her fatalistic family physician. I feel bad for him now too, put in the position of being so frank and honest, but at the time I hated him – hated him.

He told my mother to give up hope. Stop taking her blood pressure medication because really, what’s the point? Told her not to worry about getting hooked on the Narcotic painkillers because in all honesty, she wouldn’t be on them very long.

‘I know he believes I’ve got 6 months to live and shouldn’t spend them hurry scurrying around away from home and family looking for miracle treatments.”

I remember thinking he should just hang up his coat and stethoscope right there. Of course there is still hope. Of course she should try! He watched as the water rushed in and started to carry her away from us. He didn’t even try to to throw us a life preserver. Why would he do that??

Hindsight…I’ve learned to hate it.

14 Comments on "My Mother’s Treatment Journal: The Diagnosis"