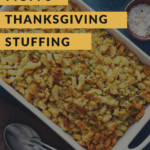 “No more,” my mom used to plead with us kids (and my Dad) to stop picking at the stuffing sticking out of the turkey’s bottom as she took it out of the oven. The crispy top was the best part and worth risking a finger burn to pinch a piece.

There was nothing fancy about my Mom’s Thanksgiving stuffing recipe. It was just like her: everyone’s favorite, but nothing fancy.

The recipe came from my Mom’s Mom. Grandmom’s food prep always consisted of “using up” whatever needed “eating up,” so I don’t think there was an official recipe for this or anything else she ever made.

You had to start early on Thanksgiving morning with chopping celery and onions. We were usually still in pajamas. Mom would be distracted with all the details of dinner for 20 to 40 people (depending on the year and who would be in town), so we didn’t talk much while we chopped.

It didn’t matter, I just liked having a reason to be near her.

Once she gave me the okay that I’d chopped everything small enough, it would go into the pan to be cooked down with a ton of butter. I’d stir as she prepped the turkey, searched for serving dishes, and put the cloth turkey head on a pineapple–her signature centerpiece.

Then I’d squish it all together with my fingers, adding broth or another egg as needed to make it soft.

“Is that good?” I’d ask. She’d give it a look and say, “Yeah, that’s good.” My mom never worried too much about the details. Getting the twenty-five pound bird in the oven in time to feed all those people so that there was still enough daylight after the meal for a long walk–that’s what she cared about.

The stuffing went into the back of the bird, and anything left over got cooked separately. Her stuffing always got “eaten up.” There was never enough of it.

Whenever I make the stuffing now, I always think of my Mom and Grandmom. When I’m squishing the soft breadcrumbs between my fingers, I usually end up dropping a few tears into the mix, but I think that makes it taste even better.

There’s nothing fancy about my Mom’s Thanksgiving stuffing recipe. It’s just like she was – everyone’s favorite, but nothing fancy. This recipe came from my Mom’s Mom. Grandmom’s food prep always consisted of “using up” whatever needed “eating up”, so there’s never been an official recipe.

To read some more grief recipe stories, check out this section of our blog.

Interested in sharing your own grief recipe story? Check out the submission guidelines here. And, as always, subscribe!