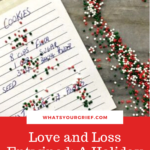 Joni is the author of more than a dozen books—including several for teens—and writes frequently on grief and spirituality topics for Medium. She enjoyed three-and-a-half glorious years with Tony before his unexpected death in 2017.

One of the traits I most adored about my partner, Tony, was his unusual combination of tenderness and toughness. He was physically big and had worked his way through a powerful career, but also developed an emotional sensitivity he wasn’t afraid to reveal.

We discovered each other in our 50s, after life trials had burnished us both. I thought of him not only as a soulmate but as my polar bear—giant and fierce in appearance but a furry teddy at heart.

The holiday cookies we baked ritually in our too-few years together captured that contrast. They were a sentimental nod to his late Sicilian dad, who had provided the recipe and performed much of the cooking during Tony’s childhood.

Mixing up these anise-flavored cookies became our only unvarying holiday tradition. We made gigantic triple batches to mail to his adult kids, using his prized eighteen-quart spaghetti saucepan—another memento of his dad.

Baking is one of my few specialties, so when I saw the stained recipe card in Tony’s handwriting, I raised my eyebrows at one ingredient: Crisco shortening? Really? An entire pound? Not that holiday cookies are ever meant to be healthy, but… yikes. Could we use butter instead and maybe make them taste better?

Altering Dad’s recipe was not an option, and after eating these cookies, I didn’t question it again. I’m not typically a huge fan of anise flavor, but I had to admit these cookies are addictive. Like Tony, they’re a perfect combination of firm but tender, savory, and sweet.

Since Tony’s unexpected death two-and-a-half years ago, I make much smaller batches every year now myself. They’re a touchstone to him in a difficult holiday season.

Tony always mixed the dough by squishing the ingredients in his bear-paw hands… so I do, too.

Their twist shape gives me comfort, reflecting for me our sense that we were two halves of a whole. And the season’s spirituality and promise of rebirth give me hope that, someday and somehow, we can be twined together again.

You can read other grief recipe stories here. Subscribe.

12 Comments on "Love and Loss Entwined: A Holiday Cookie Twist"