and, of course, our very own Harry Potter Grief Theory.  Because, let’s be honest, what can’t be learned from Harry Potter?

Today we are feeling inspired to talk about ‘grief work’.  Chances are, even if you know nothing about grief theory, that somewhere along the way you may have heard someone talk about ‘grief work’, ‘the work of grief’ or something similar.  What you may not have realized is that this term was coined by Erich Lindemann, dating way back in the 1940s.  Lindemann was a psychiatrist who studied grief, doing research working with grieving survivors of the Coconut Grove tragedy.  Many cite his work in trauma as some of the earliest significant research revealing the long term impact of grief and trauma, and he certainly influenced later grief theorists, like Bowlby and Kubler-Ross.

Lindemann was interested in understanding the symptomology of grief.  Through his research he established some common symptoms of grief which included 1) somatic distress 2) preoccupation with images of the deceased 3) guilt 4) hostile reactions and 5) loss of pattern of conduct.  He also noted a sixth, less common reaction, in which traits of the deceased person would appear in the bereaved person.

Most of these are pretty straightforward to understand, but just to make sure we’re clear – somatic distress included things like difficulty breathing, losing your appetite, exhaustion and lack of motivation, etc.  Preoccupation with images of the deceased for Lindemann involved fixating on specific images of the person who died.  These were sometimes difficult images or memories and other times positive memories.  This could also include continuing to see or talk to the deceased person.  Lindemann reports that the patients in his studies often reported guilt, fixating on any instance in which they perceive that they could or should have done something to prevent the death.  Hostile reactions to others were the next symptom he discussed.  Even when people are trying to be thoughtful and supportive, Lindemann observes that grievers often feel irritable and hostile towards others.  ‘Loss of pattern of conduct’ sounds strange, but it is actually something most grievers easily relate to.  This, Lindemann explains, is the experience that even the most basic activities and tasks become a chore.  He explains that grievers are often restless, and yet activities don’t seem meaningful and even everyday activities take effort to complete.  Finally, the sixth reaction Lindemann discusses is the bereaved person taking on traits of the person who died.  He gives examples ranging from walking like the person, adopting their interests or hobbies, or seeing resemblances to the deceased in their own appearance.

What is significant in Lindemann’s work was his evidence that grief has not just psychological impact, but also physical impact.  He suggested that these symptoms can set in immediately, be delayed, be exaggerated, or may be absent.  Important also to Lindemann’s theory is the idea that grief can take either a normal or ‘morbid’ trajectory and, finally, that a mental-health professional can help get an individual back on the trajectory of a normal grief reaction.

Lindemann’s understanding of how people progress through grief and ultimately reduce the symptoms of grief is by doing ‘grief work’.  Lindemann explains that grief work will take different times for different people, but ultimately will require the same three tasks.  For Lindemann, grief work involves 1) emancipation from bondage to the deceased 2) readjustment to a new environment in which the deceased is missing and 3) the formation of new relationships.  Sounds simple enough, right?  Eh, er, maybe? 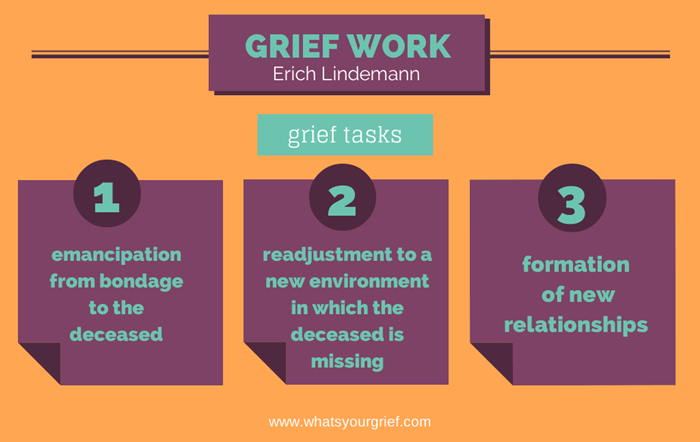 Let’s start with ‘emancipation from bondage to the deceased’.  For the record, had I been Lindemann’s editor I would have started by telling him he needed a new name for this task, pronto.  But I wasn’t, so we are stuck with this terrible verbiage.  The gist is this – we have strong attachments to the person we lost and those connections are linked to our incredible pain and negative reactions.  Lindemann explains that we need to move on (“emancipate from bondage”) in order to proceed with ‘normal’ grief and go on to form new relationships.   Now, to be fair, Lindemann does clarify that this is different than forgetting about the person we lost.   But I have to say I am not the biggest fan of this task.  I am sure I am not the only one who feels that I don’t need to be released or freed from the bond with my loved one.  If you are feeling just a wee bit annoyed by this concept, jump over to our continuing bonds theory post to be reassured that later grief theory has embraced the idea of cherishing bonds with our loved ones.

Next comes ‘readjusting to a new environment in which the deceased is missing’.  This one is quite a bit more straightforward, and one that you see in other grief theories.  After you lose someone the world is completely different, yet utterly the same.  We have to find a way to make sense of a world that our loved one is no longer physically a part of.  Last but not least, according to Lindemann we need to form new relationships.  For Lindemann, letting go of the attachments in the first task is an important part of opening up to new relationships.

It is hard not to agree with Lindemann that after a loss you have to eventually be open to new relationships.  Where things become a little foggier to me is the need to relinquish our attachments to those we have lost in order to open ourselves to new relationship.  I am sure many grievers would agree that, as continuing bonds theory suggests, we can create a new type of relationship with the person who died, while forming new and meaningful relationships. But hey, I have the benefit of an additional 70 years of grief theory and a good dose of personal experience to guide my opinions about grief.  What is meaningful about these theories is that there are always things you can take from every theory to find some understanding and comfort, and there are always some things you can leave behind.

To wrap up this quick look at Lindemann, it is interesting to consider the term ‘grief work’.  Despite the fact that many people have heard the phrase, society generally does not want to give us the time and space we need to engage in ‘grief work’.  Though Lindemann’s three tasks my not be my cuppa tea, what I can absolutely get behind is the idea that grieving is ‘work’ and we need to give it time and attention in order to cope.

Looking for grief tips and support?  Subscribe to get our posts straight to you inbox!

Grief and Guilt: “I Can’t Believe I Did That” Edition

8 Comments on "Grief Work: the grief theory of Erich Lindemann"