Growing up, my siblings and I were picky eaters. That’s probably putting it mildly. Honestly, we were like inscrutable food critics with seriously unsophisticated palates. Gawd, I’m annoyed with my younger self just thinking about it.

My poor mother was hard-pressed to make a meal that pleased all of us. Bless her, though; she tried. She tried until four of her six children went inexplicably vegetarian in the late 80s. That’s when she threw in the towel.

Obviously, she didn’t stop feeding us altogether, but she did stop feeding us all together, as in the same thing at the same time. Instead, she opted to make big batches of our favorites to last us through the week. When we were hungry, a serving of this or that got reheated or, if the kid didn’t like their options, they could have cereal.

I’m ashamed to say that not only was I impossible to feed, but even as an older child I never really learned to fend for myself. My mother would have willingly taught me to cook, but I was an unambitious teenager. I could boil water and make pasta, but even here I fell short the first time I tried to use a gas stove. Look. I’m not proud of myself.

Anyway, after a few semesters eating in the college dining hall, I finally gave in and asked my mother for help. Eating grilled cheese for dinner every night was taking a toll on my physical and mental health. Of course, she obliged because my mom was always willing to help her kids get organized and make plans. She was known for passing along pages of notes and lengthy letters, always handwritten on yellow legal paper, with research, to-do’s, things to think about, her worries, etc.

Her solution to my particular problem was pretty cut-and-dry. She wrote down the recipes and detailed instructions for all those family favorites. The ones she used to make in bulk when I was growing up. Some were complicated but healthy – like her vegetarian chili – and some less so – like her “blushing bunny” (tomato soup + milk + Velveeta).

I had no idea at the time that I’d treasure these recipes – well – forever.  Almost 18 years later, I still keep them tucked into an old copy of “Where’s Mom Now That I Need Her?”. The yellow legal paper has torn, and her cursive letters have faded, so I handle them like a historian worried about preserving an ancient document. 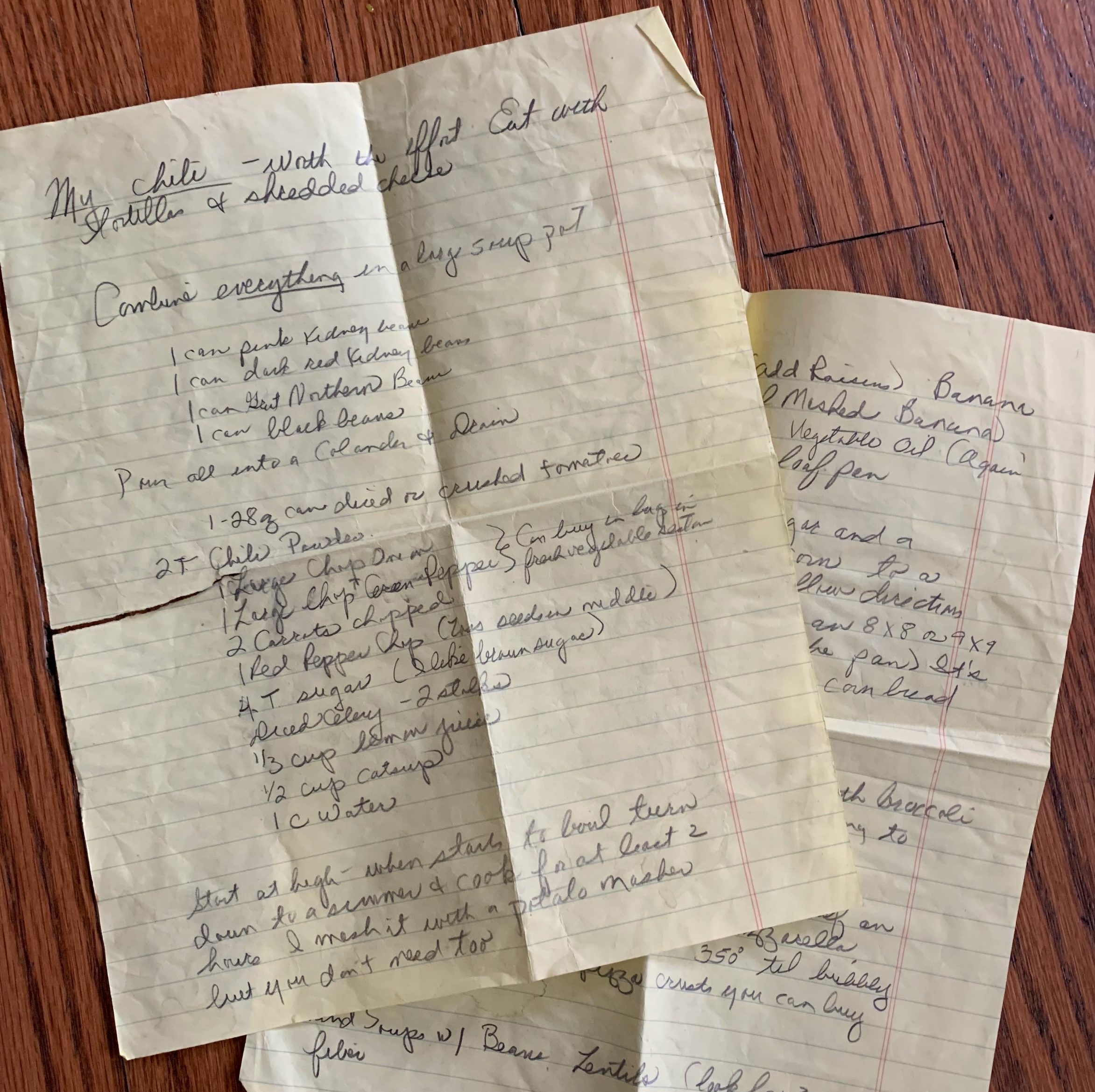 Honestly, I could probably remember the recipes by heart if I needed to, but I still pull them out every once in a while. Especially this time of year, as the anniversary of my mother’s death draws near. I find there’s nothing more soothing than spending a chilly Sunday afternoon following her handwritten instructions and finding comfort in Mom’s cooking once again.

The reasons why I find this so therapeutic are layered. It isn’t just about connecting with her, though that’s the majority of it. I also find cooking and baking make me feel good, despite the fact that I’m terrible at both! An article about this phenomenon popped up in my Google Alerts just this morning titled ‘Research suggests taking up baking can help you feel better’.

In the article, they cite research that suggests “culinary therapy” is an effective tool in coping with grief (among other findings). Well, this was just the push I needed to put the following request, which Litsa and I have been discussing for some time, out into the ether.

A request for your grief recipe stories:

It’s common to connect with deceased loved ones through food – whether it’s in saving handwritten recipes, cooking traditional foods at the holidays, or in fond memories of cooking together. What’s Your Grief would like to explore and honor these connections by collecting and sharing your grief recipe stories.

4 Tips to Deal With People Who Say the Wrong Thing When You’re Grieving.