Last night I watched ABC’s special “The Untold Story of ‘The Sound of Music.’” I stopped on the special because I thought it would be a harmless and happy break from the murder and deception of HBO’s, The Jinx, which I had just finished watching.

Remember when we told you that grief triggers tend to pop up when you least expect them? Well, thats exactly what happened when last night my delightful romp through Salzburg, Austria with Diane Sawyer and Julie Andrews turned into an hour long sob-fest.

I think I underestimated just how much my mind has confused Maria von Trapp, as played by Julie Andrews circa 1965, with my own mother.  Her short hair, her love of children, her guitar, her singing, her values and idealism – which ‘her’ am I talking about?  Doesn’t matter, they’re the same person!  I’m only slightly exaggerating.

It’s remarkable how much I’ve allowed my mind to project my mother onto a woman I don’t even know.  I guess maybe that’s part of the reason why it works, Julie Andrews von Trapp is kind of a blank slate to me.  I don’t know how it was in the days when she was front-and-center, but if she was a part of rumors or gossip or scandal it was way before my time. I don’t have the usual tabloid fodder to prove she’s anything but what I idealize my mother to have been. 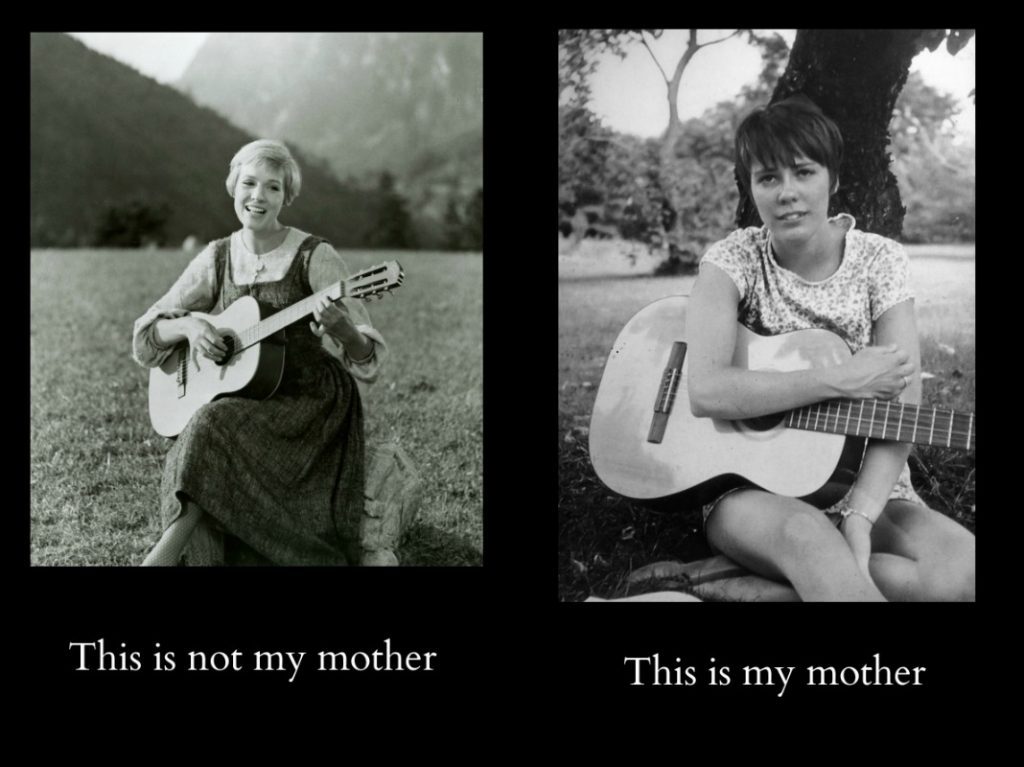 I can tell some of you are starting to think I’m weird, but I’m not.  In fact at one point in the interview Diane Sawyer actually said to Julie Andrews something to the effect of, “You know, there are people on the internet who say they wish you were their mother.”  For a second this made me think that Julie-Andrews-Mother-Envy was really a thing.

This morning I looked around the Internet to see if I could find anything about seeing your loved one in other people after they die.  Nothing turned up. Don’t others have this experience?  Maybe I am weird.  It just seems to make sense that people would look for those they love and miss in the appearance, personality traits, values, abilities, roles and tendencies of others.

Of course, I’m familiar with the concept of yearning, which is a very common grief reaction.  After a death, we long for our loved ones and we wish it were possible to be reunited with them.  Although we intellectually know the person cannot return, we still search for them.  Yearning is typically most intense around 5 or 6 months following a loss and afterward it should lessen, but I suppose less is not the same thing as gone.

Even years after my mother’s death I guess it makes sense to feel a small sense of yearning for her.  I have a cognitive understanding that she is gone, yet I still pine for the things were her.  I still know these things when I see them, although I rarely do (except when I see her identical twin….her identical twin and Julie Andrews).

It all reminds me of a sweet children’s book by P.D. Eastman called ‘Are You My Mother?’  Here is Wikipedia’s synopsis…

“Are You My Mother?” is the story about a hatchling bird. His mother, thinking her egg will stay in her nest where she left it, leaves her egg alone and flies off to find food. The baby bird hatches. He does not understand where his mother is so he goes to look for her. As he cannot fly, he walks, and in his search, he asks a kitten, a hen, a dog, and a cow if they are his mother. They each say “No”.

Refusing to give up, he sees an old car, which cannot be his mother for sure. In desperation, the hatchling calls out to a boat and a plane (they both do not respond), and at last, convinced he has found his mother, he climbs onto the teeth of an enormous power shovel. A loud “SNORT” belches from its exhaust stack, prompting the bird to utter the immortal line, “You are not my mother! You are a SNORT!” But as it shudders and grinds into motion he cannot escape. “I want my mother!” he shouts.” 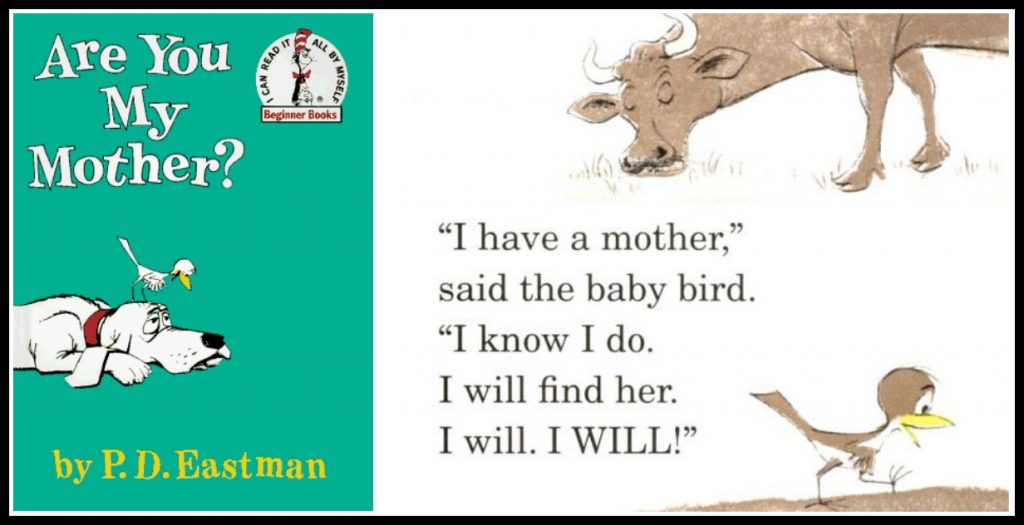 This isn’t how the story ends, but it’s the end for me.  Even though I know my mother is gone, on some level I always look for her.  I quietly think,“Are you my mother?”; but the answer is never yes.  I know I’ll never find her, yet I still look in hopes that someone will come close enough to fool me for a little while.

I think it kind of makes sense to enjoy our loved one’s qualities where ever we can find them.  It’s even okay to enjoy them when they’re embodied in someone else, so long as we always remember that the someone else is not and will never be our loved one.  I know most of us get this reality, but sometimes we subconsciously forget.

Have you ever heard of transference? Honestly it’s a larger topic for another day, but I bring it up because one of the ways transference occurs is when we meet someone who reminds us of a person from the past and we unconsciously assume the new person has traits and characteristics similar to the person from the past.  Making assumptions about people based on perceived similarities sets everyone up for confusion and disappointment; especially when we know no one can live up to the memory of our loved one.

I guess this is all I have to offer at this point – sometimes we see people who remind us of our loved ones and it makes us sad.  I know that’s not very helpful, but honestly I’ve only begun to think about this. I guess if you’ve had this experience, at least you know you’re not alone.  That being said, I’d love to know if anyone else has any input on the topic. Please leave a comment below.

71 Comments on "You Remind Me: People who remind us of our loved ones"