I was struck by something WYG guest blogger, Nick Frye, said in his article Self-care in Grief: The Myth of Keeping Busy.  Somewhat unrelated to his main topic was the opening line to another important discussion.  He said…

“Isn’t it…true that every relationship is unique and therefore we all have our own unique experience with grief? After all, even a well-meaning friend who has had a parallel loss does not know how you feel. What we all do share is the experience of a broken heart because we lost someone/thing we love.”

When Nick spoke about his wife’s head injury I recognized his grief, but only because I had a similar experience.  Several years ago my brother was in a terrible car accident and ended up in a coma.  For 2 weeks we stood on the edge of a cliff trying to pull him back into consciousness; finally, his strength won and, little by little, he re-entered the world.  We, his friends and much of his family, celebrated and then returned to our normal lives.

But recovering from a life-altering brain injury is no quick or easy thing and while the rest of us carried on as though nothing had changed, my brother, his wife and his children were left to walk hundreds and hundreds of miles – sometimes lost, sometimes angry, always carrying more weight than any one person should bear – towards a life they no longer even recognized.  I can never know the depths of their loss, but I realized it was real and it needed to be grieved.

Even before WYG, I spent a lot of time on grief websites and I’ve often noticed comments from people who identify with the feelings of grief but don’t feel their particular loss is important enough to say they are ‘grieving’.  There is the feeling that different types of losses – an early pregnancy, a beloved pet, an elderly grandparent – cannot or should not elicit the same grief response as someone who has lost a spouse or a parent, for example, and therefore the classification of ‘grief’ does not belong to them.

But I ask you if it’s not grief then what is it?

There are probably a few people out there saying to their computer screen, but it’s not the same, and you’re right…no one’s grief is the same.  As Nick pointed out, blanket comparisons can’t be made for even parallel losses. Regardless of the type of loss, no one can know the extent of another’s pain and sorrow.  Although grief is grief, how you experience it is as unique as you and me. 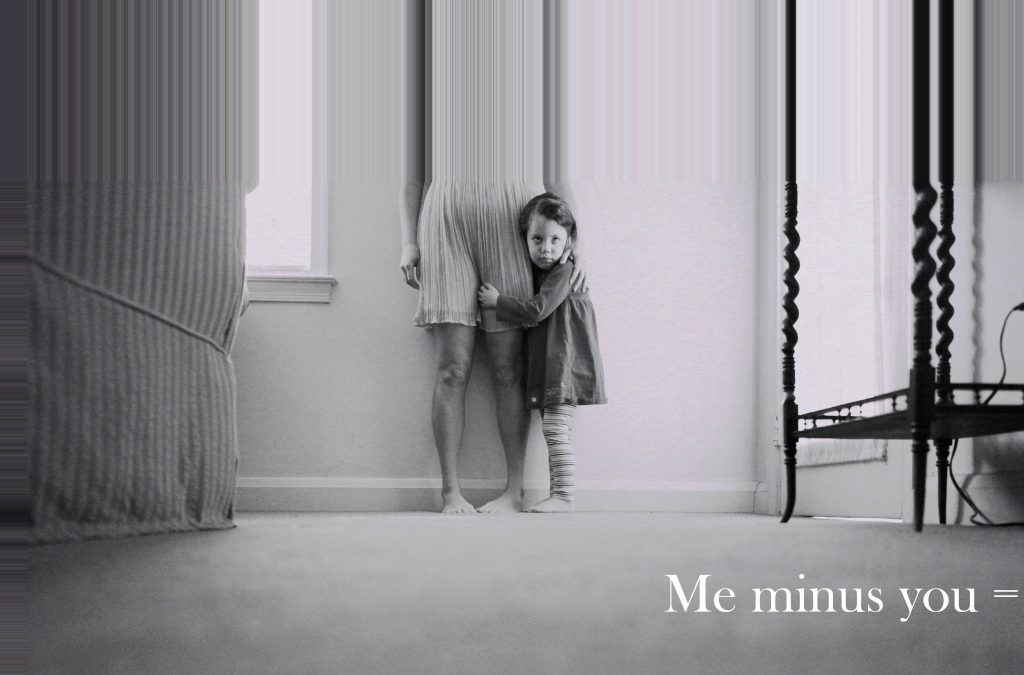 There is no equation for summing up the grief felt after any particular type of death.  We cannot say that father minus child = x amount of pain, or husband minus wife = x amount of sadness.  It just doesn’t work that way.  Sometimes we want it to; either because we know someone who is grieving and we want them to believe ‘we understand’ or because we are lonely in our grief and we want to be able to relate to others with similar losses.  Unfortunately, the complexity of relationships makes this impossible.

“The whole is other than the sum of its parts”

“The whole is greater than the sum of its parts”

Although not necessarily its original implication, it’s a theory that holds true when talking about relationships.

The equation You + Me = Us is cute but it does not compute.  ‘Us’ is composed of much more than the sum of two individuals in a relationship; it’s a system, not a linear equation.  Take a marriage for example; there’s a husband, a wife, and everything that exists in between. Emotions felt towards one another, how they relate to one another, unresolved issues, how their lives intertwine, their children, how they help define each other, how they help support one another, dependency, history, perceived future, needs, intimacy, routine, sex, love…the list goes on.

When one spouse dies you can’t simply subtract them out of the equation, the whole system is thrown off.  Bills, children, household chores, companionship, affection – all these things were previously striving towards equilibrium in the system.  Remove one person and everything must be renegotiated and redefined. You can’t possibly know what it means for someone’s spouse to die, it will impact their lives in ways not even they would have expected.

Our experience with the aftermath of a death, the ‘grief’, is a culmination of who and what we lost and our individual ability to cope with this.  Our tolerance for pain differs and we all feel varying shades of hurt.  Loneliness, absence, regret, need, longing, guilt, stress, lack of support – how much of this do you live with and how much can you tolerate?

Even within a family, the same loss will affect individuals differently.  It would be useless to compare my grief to my sisters; her worldview is different, her support system is different, and her feelings towards death and dying are not the same.  I live with a lot of regrets, does she?  She has nightmares about my mother, do I?  Although I can probably identify and relate to aspects of her pain, I can never fully understand it.

Grief is the loss of something we love and at its core, it is complex, complicated, and sneaky.  It is something that stays with us forever. Its depth, its trajectory, and its timing are often unpredictable and surprising. We are limited in our ability to truly understand another’s grief because most of us have yet to fully understand our own. What we do have in common, is the experience of a broken heart and the wisdom to feel compassion for others facing similar pain. What we can do is remember that it isn’t something to be judged. Grief isn’t a problem to be solved; grief is a weight we forever carry.

Don’t forget to subscribe to ‘What’s Your Grief’ to receive updates straight to your inbox.  It’s the only real way to stay up to date on the discussion.

Does Grief Make You Tired?